Four days of picketing President Wilson at the White House have brought gratifying results, and though the “Silent Sentinels” will be taking tomorrow (Sunday) off, the protests will be even larger next week, and continue until President Wilson endorses and works for the Susan B. Anthony (nationwide woman suffrage) Amendment.

Today there was a marked increase in visitors and volunteers at the headquarters of Alice Paul’s “Congressional Union for Woman Suffrage,” all as a direct result of people seeing the pickets, banners and tricolor standards next to the White House gates. Even President Wilson has been giving increased respect to the pickets, despite being the object of their protest. He went from being expressionless at first, to smiling, then tipping his hat and now bowing slightly as he passes through the gate. In response, the picketers briefly dip their banners as a way of returning the salute.

The Sentinels have also been getting a lot of friendly attention from the squirrels who populate the White House lawn. Though squirrels tend to be neutral on the issue of suffrage, they’ve been quite useful to the cause by drawing crowds who like to watch the Sentinels feed them by tossing peanuts through the fence.

One visitor to today’s protest passed along a note with especially encouraging news. He’s in a position to overhear members of Congress talking candidly among themselves, and according to this anonymous source, a couple of prominent politicians were having a conversation in which both agreed that women were becoming angry at the way the Anthony Amendment was being stalled, and the only way to avoid the wrath of women voters in the eleven “equal suffrage” States might be for Congress to simply pass the measure and send it to the State legislatures for ratification.

A meeting was held late this afternoon at Cameron House to share picketing experiences and plan strategy for the next week. A number of today’s new recruits attended, and volunteered to do sentry duty. Extra personnel will be needed, because instead of just picketing alongside the gates, an attempt will be made to line the entire White House fence along Pennsylvania Avenue with suffragists and banners late one afternoon next week. That time of day has been chosen because many of the picketers have family duties to perform in the early morning and at lunchtime. 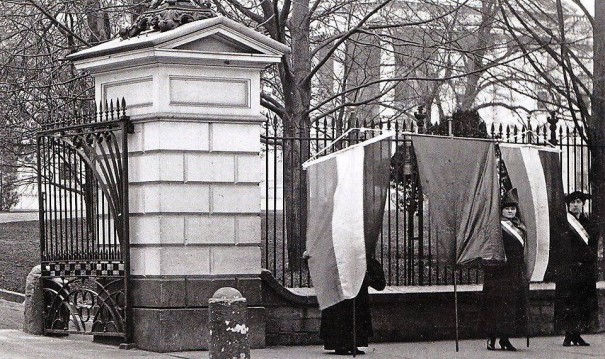 One example of how this protest is uniting women over the issue of suffrage was shown recently when a woman from Germany and another from England saw the banners as they were each passing by and spontaneously joined the picket line. Despite the fact that their nations have been at war with each other since August 4, 1914, they chatted amiably, and if given the opportunity, both probably would have asked Wilson the same question that appears on the banners: “MR. PRESIDENT, WHAT WILL YOU DO FOR WOMAN SUFFRAGE?”

The past four days have certainly been amazing, and this campaign is just getting started, so there’s no telling how much may be accomplished in the upcoming weeks !