Reinforcements – and contributions – for the “Silent Sentinels” today.

The small group of 12 banner-bearing suffragists huddled around the White House gates from 9 a.m. until 5:30 p.m. since the 10th was expanded by enough new recruits today to form a line of pickets stretching almost all the way along the fence.

Support for their protest of President Wilson’s refusal to endorse or work for the Susan B. Anthony (nationwide woman suffrage) Amendment is manifesting itself in many forms and is growing as quickly as the number of protesters. Heavy coats and rain gear have been the most appreciated items donated to the Sentinels as they fight the Winter weather. Among the most generous of their outfitters are Elizabeth Kent and her husband, Independent Representative William Kent of California. They have given not only their own warmest clothing, but gone around collecting more from other supporters so Elizabeth can make her daily donations.

Monetary contributions are certainly welcome, and are coming in at an increased pace. Alva Belmont is the largest donor so far, at $5,000. Louisine Havemeyer sent a note to Alice Paul, who was on the picket line today right along with her troops. The note said: “Good work! Keep it up!” and was accompanied by a check for $200.

Small contributions can mean a lot as well, because they show that even people who are not active in the movement are now lending their support. For example, a schoolmaster leading a group of students along Pennsylvania Avenue walked up to a Sentinel and gave her five dollars. Another man dropped over to their headquarters at the Congressional Union for Woman Suffrage office and dropped off a dollar “to treat the pickets to coffee.” Significantly, there were even a few male supporters of equal suffrage in the line from time to time today alongside the officially designated protesters of the Congressional Union.

Expanded picket lines require more banners, so four more have been added. All the banners ask one of two questions: “MR. PRESIDENT, HOW LONG MUST WOMEN WAIT FOR LIBERTY?” and “MR. PRESIDENT, WHAT WILL YOU DO FOR WOMAN SUFFRAGE?” 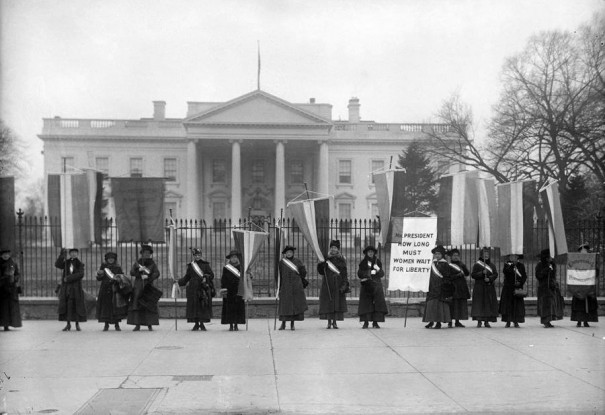 Presidential cordiality continues to steadily increase, and has come a long way from the first day when Wilson clearly tried to ignore the pickets. Once again the President smiled, tipped his hat and even leaned forward in a kind of bow while being driven past the gate. But today First Lady Edith Wilson even gave a smile, and the automobile deliberately slowed – instead of speeding up – when entering the White House grounds.

One of the things people wonder about is whether women’s protests can have much political effect, since so many women can’t vote. But women have full voting rights in 11 States now, and for a time today, there were more women voters on the picket line than non-voting women.

President Wilson and Members of Congress must slowly be recognizing the fact that woman suffrage is steadily expanding, and women are becoming more and more of a force in electoral politics. By coming thousands of miles to protest, some of the women from Western States have shown concern for their sisters in non-suffrage States. These pickets should help show the Senators and Representatives in Congress who are elected from suffrage States that their female constituents do care about the issue, and will hold them responsible for their actions in regard to the Anthony Amendment. Even those who currently owe their jobs to a solely male electorate must sense that this will not always be the case, and will hopefully decide that this would be a good time to jump on the “Votes for Women” bandwagon.