She is scheduled to go on trial tomorrow for violating Federal law by distributing copies of her magazine, “The Woman Rebel,” which included articles on contraception.

Rose Pastor Stokes began the meeting by reading a number of letters from those in support of Sanger’s campaign to remove birth control and information about it from the list of “obscene” items criminalized by both Federal law (The Comstock Act) and State law (Section 1142 of the New York State Penal Code.)

The first speaker was Dr. Ira S. Wile. He made a point that proved quite popular with the audience by saying that Sanger should get support not just from those who favor birth control, but from all those who believe in the right to discuss controversial and vital topics frankly and publicly. Dr. A. L. Goldwater spoke next, recounting and praising her work. After he introduced the guest of honor, she came forward to speak, amid great applause.

Early into her speech, she defended her aggressive – even illegal – methods of promoting the cause:

I realize keenly that many of those who understand and would support birth control propaganda if it were carried out in a safe and sane manner cannot sympathize with or countenance the methods I have followed in my attempt to arouse the working woman to the fact that bringing a child into the world is the greatest responsibility.

They tell me that ‘The Woman Rebel’ was badly written; that it was crude; that it was emotional and hysterical; that it mixed issues; that it was defiant, and too radical. Well, to these indictments I plead guilty. I know that all of you are better able to cope with the subject than I am. I know that physicians and scientists have a greater technical fund of information – greater than I had on the subject of family limitation.

There is nothing new, nothing radical in birth control. Aristotle advocated it; Plato advocated it; all our great and modern thinkers have advocated it. It is an idea that must appeal to any mature intelligence.

She then said that it was time for contraceptive knowledge to be possessed not just by a small group of professionals, but by all people, because those who are denied birth control must either bring far more children than they want, or can support, into often miserable conditions, or resort to dangerous, illegal abortions. 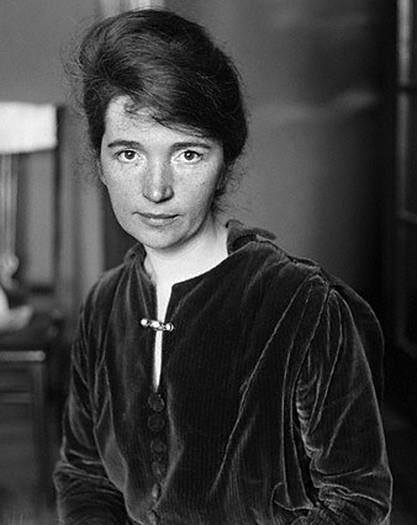 Sanger said that in the beginning of her battle, she found many of the elite discussing birth control among themselves, but such discussions and information never got to the general public:

I might have taken up the policy of safety, sanity and conservatism – but would I have got a hearing? And as I became more and more conscious of the vital importance of this idea, I felt myself in the position of one who had discovered that a house is on fire; and I found out that it was up to me to shout out the warning!

The tone of my voice may have been indelicate and unladylike, and was not at all the tone that many of us would rather hear. But this very gathering – this honor you have thrust upon me – is ample proof that intelligent and constructive thought has been accrued. Some of us may only be fit to dramatize a situation – to focus attention upon obsolete laws, like the one I must face tomorrow morning. Then, others more experienced in constructive organization can gather together all this sympathy and interest which has been aroused and direct it.

She then thanked all the guests for their support, and told them that doing something to promote the cause of birth control was the most appropriate and meaningful way of supporting her.

The penalties for distributing birth control information can be substantial, so Sanger is running a real risk when she goes on trial. A few months ago, her husband, William Sanger, served 30 days in jail for violating New York State law by giving out a single pamphlet entitled “Family Limitation.” A man pretending to be a birth control advocate – but who was actually an agent of “anti-vice” crusader Anthony Comstock – hounded Mr. Sanger into searching for, then giving him a copy of the pamphlet, which was in a desk at home among his wife’s papers. She was in Europe at the time.

Margaret Sanger’s case started not long after she began publishing her monthly magazine, “The Woman Rebel,” in March, 1914. Time after time it was deemed “nonmailable” by postal authorities, and on August 25, 1914, she was indicted by the Federal Government for “objectionable” material in her magazine’s issues of March, May and July. Near the end of October, 1914, she temporarily fled to Europe, where she worked with many other birth control advocates, but voluntarily returned to the U.S. on October 6th of last year to face the charges. Her trial was initially to begin at the end of December, but was first postponed until January 4th. At that time the U.S. Attorney’s office offered her a plea bargain in which she would be fined, but not jailed. She rejected the deal, and so will face charges for which conviction could mean a $5,000 fine, imprisonment for five years, or both on each count.

Changing this law, and the many State laws modeled after it, will require both dedication and courage, but it appears that Margaret Sanger has ample supplies of both. Hopefully the publicity generated by her trial tomorrow will cause enough public outrage to mark the beginning of the end of such repressive legislation, and eventually result in birth control becoming easily accessible to all who desire it.