This is certainly an exciting time to be a feminist, and that was especially true in Chicago today.

Women at the center of two national events next week are here promoting their upcoming ventures. Rep. Shirley Chisholm (D-NY) is in town to talk about her Presidential campaign, which has been running informally since July, but will be officially launched four days from now. Gloria Steinem is here as well, generating publicity for the first stand-alone issue of “Ms.” magazine (pronounced “miz”), which will hit the news stands in just a few days. 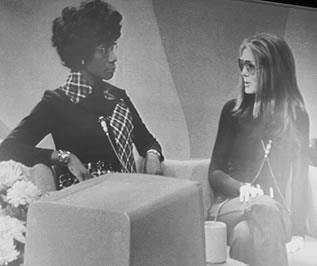 They started the day early – and together – as guests on Channel 7’s “Kennedy and Company.” Steinem was delighted to share the camera with Chisholm, saying, “I don’t even remember when we first met. I know our first long conversation was about two years ago when I tried to talk Shirley into running against Senator Javits. We’re in contact with each other at least once a month. We spent a fortune in telegrams yesterday trying to arrange our press conferences here so they wouldn’t conflict.”

Though she forgot to bring along her copy of “Ms.,” Steinem did remember to wear her “Shirley Chisholm for President” button. Since she’s already been campaigning for Senator George McGovern (D-SD), Steinem was asked if there was a conflict, but she said that she supported both candidates.

Steinem had undivided loyalty toward her new magazine, however. Originally an insert in the December 20th issue of “New York” magazine, the response was so great that a full-length version is about to be sent out to news stands all around the country. If the 300,000 issues printed up sell out (it’s labeled a “Spring” issue so it will have several months to do so), “Ms.” will become a monthly “forum for all women” and deal with feminist and real women’s issues in a way that mainstream “women’s magazines” don’t.

The idea could work. Though “The Revolution,” owned by Susan B. Anthony and edited by Elizabeth Cady Stanton and Parker Pillsbury had a rather short run after its launch in 1868, Lucy Stone’s “Woman’s Journal” was successful, and quite influential from 1870 until 1917. Fifty-five years later it’s time for the country to have a new, overtly feminist, nationally-distributed, large circulation magazine.

Rep. Chisholm certainly sees the need for such a magazine in a nation that has yet to get over its biases in regard to sex:

People in this country have to realize no psychological test says a man is more intelligent than a woman. We here in the United States have become so hung-up on sex. We waste our energies talking about the differences between men and women, not the similarities. I have talent, and I have ability. Permit me to use them. Don’t reject me because I’m a woman.

Apparently there is still plenty of work to do in regard to eliminating sex bias in the media in particular. One nationally syndicated talk show has given the eight other candidates seeking the Presidential nomination an entire show to themselves, but Chisholm was offered only the chance to share a show with Gloria Steinem. As Steinem notes: “To this day, she hasn’t been invited to do the entire show. The problem is that people refuse to take Shirley’s candidacy seriously.”

Later in the day, Chisholm addressed a Catholic audience at a Cana Conference seminar at the Drake Hotel, and talked about the future of Black families:

If we are to relieve the burden it will not be at conferences and rap sessions about their situation, but by providing employment opportunities for the Black man who can’t support his family, but instead must leave so that his wife will be eligible for welfare benefits. No one stops to recognize that in America, Black men on the street corners do not have passports to American society – a white skin – and are paid wages embarrassing to them. Union membership is closed.” She then suggested a solution: “We need a Marshall Plan immediately that will give Black men an opportunity to work and will provide day care centers so that money spent for child care can be spent instead where it is needed – for rent, food, clothing, not to mention education.

Addressing the issue of reproductive rights, Chisholm told the priests, nuns and other members of the Church in attendance that she was a supporter of birth control and legalizing abortion:

I reject the notion that birth control by Black Americans is a form of ethnic suicide… as long as we have women in civilized, Western society – Black women, white women, pink women – we’re going to have abortion. This accounts for the largest number of maternal deaths in this country, particularly among poorer women, from quack abortionists, people who have butchered bodies in back rooms.

Let’s hope that both “Ms.” magazine and “Chisholm for President” meet with success, and are just two of many more manifestations of the new wave of feminism that has already brought about such major changes in less than a decade.