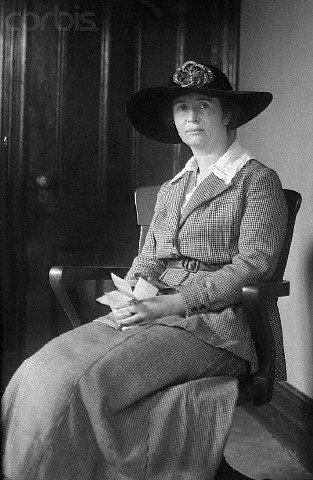 She committed her “crime” at America’s first and only birth control clinic, founded by her sister, Margaret Sanger, Byrne, and Fania Mindell. It opened at 46 Amboy Street, in Brooklyn, on October 16th, then was raided and closed on the 26th.

Byrne is not yet in her cell in the Workhouse on Blackwell’s Island because after initially arriving there earlier today, a writ of habeus corpus brought her back to court, and by the time it was dismissed, it was too late to return her to the Workhouse to complete the rest of the in-processing procedure. She is spending the night in a cell at The Tombs, in Lower Manhattan.

But regardless of location, her hunger strike is on, and she says that she will not cooperate in any way with her jailers. “I do not intend to have any physical contact. My sentence is unjust, and I shall protest against it in this way. I shall not work, eat, or drink while I am here.”

Commissioner of Correction Lewis is skeptical, and equally determined. He says that though prisoners have threatened hunger strikes before, none have actually been carried out, and that if at some point Byrne’s health is threatened, he will resort to force-feeding her. He intends to restrict press access to one female reporter from each paper – entitled to one visit only.

Aside from food and water, Byrne has thus far refused a bath and a physical examination. The confrontation with the female doctor who was to perform the exam was temporarily avoided when the order came down that she be immediately returned to court for a hearing. But upon arrival at Blackwell’s Island tomorrow, the battle of wills shall be renewed.