Gloria Steinem got a standing ovation today at the National Press Club, and the fact that she was applauded by an audience in which women slightly outnumbered men was proof of how much things can change when feminists are determined to change them.

From its founding in 1908 until 1955, women reporters were banned from even entering the National Press Club as guests. After that time they were allowed in, but had to bring their own brown-bag lunches and sit quietly in the balcony without asking questions of the speakers, while male reporters dined splendidly at the ballroom tables and were permitted to ask the day’s most noteworthy news makers as many questions as they wished. Finally, on January 15th of last year, it was decided to admit women as members, with precisely the same rights and privileges as men.

But all those years of protests, and last year’s vehement debate over admitting women seemed like relics of a previous century, with women at least as numerous as men at the tables, and several of the women full-fledged members, not just guests. The club’s president, Warren Rogers, even seemed apologetic about his previous opposition to admitting women and said: “That was in the dark days of my early middle age. I have grown.” 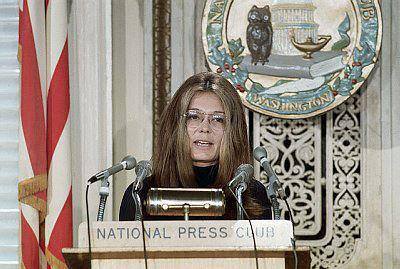 Unfortunately, Rogers hasn’t quite outgrown the idea that women should be judged primarily on their physical appearance, nor learned the word “feminist” as yet, because in his introduction he described Steinem as “certainly the most attractive of the women’s libbers.” That remark, which would probably have gone unnoticed or gotten some applause from an all-male, pre-feminist audience, drew some hisses this year.

Gloria Steinem is in Washington, D.C., today as part of a nationwide tour promoting her new magazine, “Ms.” (pronounced “miz”) which will hit the news stands for the first time this week. It intends to be a feminist forum for all women, and a revolutionary alternative to the old-style “women’s magazines” that rarely challenge, and generally reinforce, traditional female roles. If her magazine is anything like her speech today, there’s no danger of it being confused with “Woman’s Day,” “Redbook,” or “McCalls.”

She bravely began her speech to a room full of reporters and editors with a two-front attack on the media, criticizing both unequal employment practices and stereotyped portrayals of women: “The real nitty-gritty comes here, for both women and minority men… They are unlikely to be put in a position of authority over white men. How many women or Black city editors have you met ?”

Steinem then went on to single out as an example of bias one man about whom six people complained to her before her speech:

One metropolitan editor here in Washington was the subject of six complaints for clear prejudice against women. The editor is said to give the women, who are less than 20 per cent of his staff, more than 60 per cent of the night assignments and to put women reporters with up to five years’ experience back to the cub reporter work of writing obituaries.

(Washington Post editor Harry Rosenfeld presumed he was the target of this accusation and strongly denied the charges later in the afternoon.)

Steinem then went on to cite numerous instances of unequal pay for equal work, hiring bias, and the exclusion of women from various associations made up of media professionals.

She used as a prime example of bias in coverage of women the fact that back in 1969, when the State of New York was holding hearings on possible changes in its abortion law, the only witnesses called to testify were “14 men and one nun,” and “New York reporters saw nothing peculiar about that, and only began interviewing women on the question after the women started demonstrating in the streets.” She said that this kind of attitude shows “women are not taken seriously. We are undervalued, ridiculed or ignored by a society which consciously assumes that the white male is the standard and the norm,” and said the press should challenge this assumption, not perpetuate it.

She then got to the main reason for the speaking tour, and began discussing some of the articles in her new magazine. In one by Daniel Ellsburg, he describes “the need to win, or at least not to lose, as a culturally masculine problem. The less secure the male, the more he has to prove: witness Richard Nixon.” (Finally a subject the audience could laugh about …) “Perhaps all those years of sitting on the bench watching all the football players go by ….” she said, speculating on the cause of his problem. Then, to the delight of many, she called the President “the most sexually insecure chief of state since Napoleon.” She also noted that “the most hawkish group in society is likely to be white, male, well-educated, high-income, with a drive for increased status – precisely the group most likely to make foreign policy.”

During the lively question-and-answer session, she was asked about the fact that not all men are “hawks” nor are all women “doves” in regard to war. Though she agreed Senator Margaret Chase Smith (R-Maine) was hawkish, she also noted that: “In the whole hierarchy of hawks, she’s nowhere.”

She said that the Nixon Administration seems disappointed that Indira Gandhi isn’t as warlike as they had hoped. They assumed that any “self-respecting man” would have invaded West Pakistan, but this woman Prime Minister hasn’t. Steinem noted that Margaret Mead had observed that women are “less warlike,” but can be even more fierce than men when fighting in self-defense.

Returning to politics, she got another laugh at the President’s expense when she was asked in what areas she would like to get support from Nixon. “Impeachment, maybe,” she quickly replied. But after a few moments she remembered his longtime support for the Equal Rights Amendment and said she really could use his help in getting it through Congress.

She has already expressed her support for both Senator George McGovern (D-South Dakota) and Rep. Shirley Chisholm (D-New York) in their Presidential campaigns, but she definitely isn’t a supporter of Senator Ed Muskie (D-Maine). The first time she met him, she questioned him about why he took so long to come out against the current war in Vietnam. He lost his temper, and was overheard saying: “I knew we shouldn’t have let this girl in in the first place.”

Her appearance ended as it began, with a reminder of the Press Club’s previously all-male history, and a perfect illustration of her point about the assumption of masculinity as the norm when when was presented with the traditional gift of a National Press Club tie. Both she and her audience got a good laugh out of it, then she left amid loud and sustained applause.