Former First Lady Eleanor Roosevelt called on President Kennedy at the White House today and gave him a three-page list of women he should consider for top jobs in his now 52-day-old Administration.

Thus far only 9 of his 240 appointments have been to women, and none of the nine have been chosen for Cabinet rank or high policy-level posts. The two had an extended discussion, lasting half an hour, but what else they may have discussed was not revealed.

When asked by a reporter if Kennedy had failed to appoint enough women, Roosevelt diplomatically answered: “Some people feel that way.” One of those who has expressed that view is Emma Guffey Miller, a member of the Democratic National Committee since 1932. Last month she wrote to the President saying: “It is a grievous disappointment to the women leaders and ardent workers that so few women have been named to worthwhile positions.” 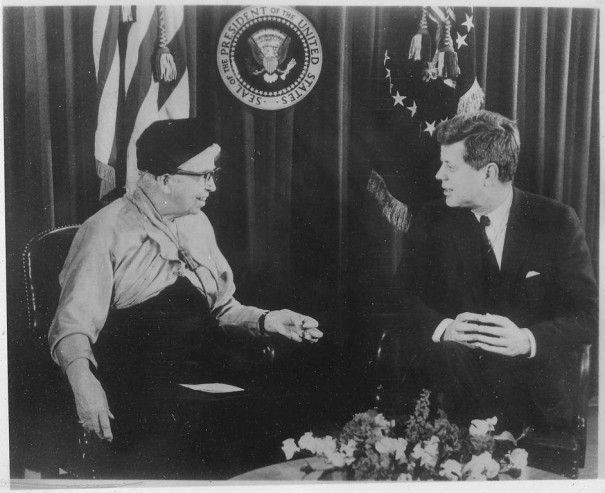 Roosevelt told reporters that the reason for the low number of female appointments may simply be that the President didn’t have a list of the many qualified women who could serve, and that sometimes men need to be reminded that there are so many able women. She then noted that President Franklin D. Roosevelt had a list of women to consider for high office, supplied by an official of the National Education Association.

Eleanor Roosevelt is one of the President’s nine female appointees since he took office a little over seven weeks ago on January 20th. She has been reappointed a member of our delegation to the United Nations. Two other women have been appointed to U.N. posts as well: Marietta Tree to its Human Rights Commission and Gladys Avery Tillett to the U.N.’s Status of Women Commission.