“Never underestimate the power of a woman” is the motto of the Ladies Home Journal, so when over 100 women occupied its offices today demanding a more relevant and liberated publication, there was clear confirmation of that old saying. 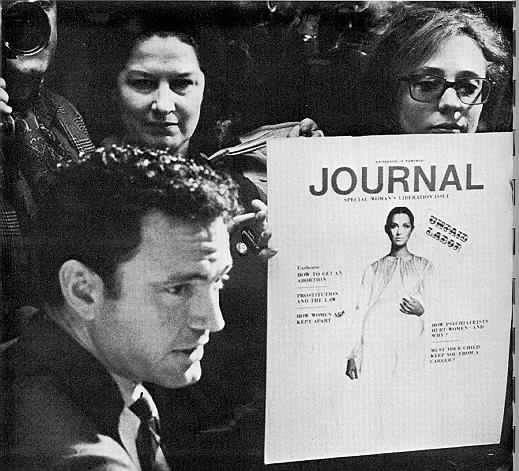 The action was called to protest L.H.J. articles that are “irrelevant, unstimulating and demeaning to the women of America.” Bearing a banner that renamed the second-largest “women’s magazine” in the U.S. “The Women’s Liberated Journal,” protesters quickly packed into editor John Mack Carter’s office to present their arguments and demands. The demonstrators made concrete suggestions and even brought a mock-up for a cover, plus 20 pages of specific ideas for articles. As Carter looked on, their statement was read:

Since this magazine purports to serve the interests of mothers and housewives, we demand that the Journal provide free day care facilities on the premises for its employees’ children, and that the policies of this day care center be determined by employees.

We demand an end to the basic orientation of the Journal toward the concept of Kinder, Kuche & Kirche [children, kitchen and church] and a reorientation around the concept that both sexes are equally responsible for their own humanity.

We demand that the magazine cease to further the exploitation of women by publishing advertisements that degrade women, and by publishing ads from companies that exploit women in terms of salary and job discrimination.

We demand that the magazine cease to publish ‘Can This Marriage Be Saved?’ and all contributions by Drs. Bruno Bettelheim and Theodore Rubin. We demand an end to all celebrity articles, all articles oriented toward the preservation of youth (implying that age has no graces of its own), and an end to all articles specifically tied in to advertising: e.g., food, make-up, fashion, appliances.

We demand that the Journal publish fiction on the basis of its merits, not specially slanted, romantic stories glorifying women’s traditional roles. The Women’s Liberation Movement represents the feelings of a large and growing mass of women throughout the country. Therefore we demand that as an act of faith toward women in this country, the Ladies Home Journal turn over to the Women’s Liberation Movement the editorial content of one issue of the magazine, to be named the Women’s Liberated Journal. We further demand a monthly column.

It was a long and trying day for all. But media coverage was good, and although there was a close call when Shulamith Firestone made a lunge at Carter, but was prevented from reaching her target by Karla Jay, it was peaceful. Finally, after 11 hours of confrontation and debate, Carter has now agreed to some demands, and the occupation is now ending. Among the things he has endorsed are day care programs for the employees, editorial training programs for women, and a special section on Women’s Liberation in the August issue.