Dozens more women were arrested today both inside and outside the Woolworth Store at 34 West 14th Street in Manhattan on this third day of the strike.

The strikers, members of Local 1250 of the Department Store Employees Union, American Federation of Labor, are seeking a 40-hour week for $20 pay, and company recognition of their union.

The battle began day before yesterday at 11 a.m., when organizers blew whistles as a prearranged signal, and 50 of the 100 women at the counters stopped work and began a “sit-down strike.” This is a new and effective tactic pioneered by the United Auto Workers at the General Motors plant in Flint, Michigan, back on December 30th. Instead of walking out and being replaced, they sat at their work stations and stopped production. 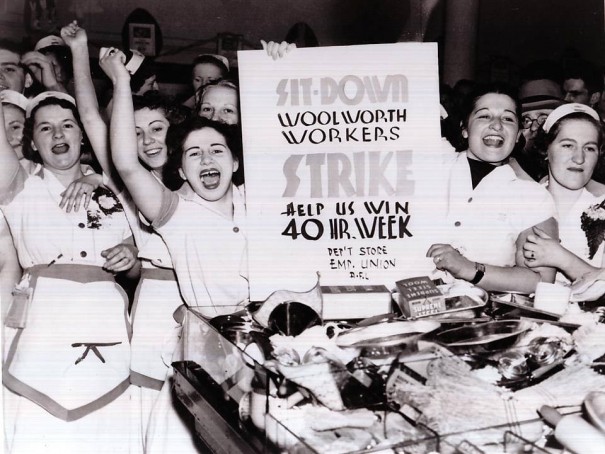 By 6 p.m., Woolworth’s management had posted private guards at all entrances to the store to keep any supplies from reaching those inside. But at 1 a.m. the next morning, 100 pickets suddenly climbed onto a ledge, opened some windows and began passing in cots, blankets, oranges, butter and some other food items to their colleagues. Management’s attempt to isolate the workers had failed, and after business had been disrupted for the day by pickets stationed at entrances, as well as by strikers in the store, the police were called in at 7 p.m. Fifty-nine strikers were arrested and dragged off to patrol wagons as the store was cleared.

Today an attempt was made to replace the strikers, when management escorted 40 women into the store at 9 a.m. But to their surprise, many of the women folded their arms and refused to wait on customers. The women were then given three choices by the store manager: work, leave or be arrested. Most ignored him, and all who stayed were arrested. At 10:00 an attempt was made by other strikers to re-take the store, with 41 arrests resulting.

The strikes at a number of Woolworth stores, and those of the H.L. Green Company as well, have become sufficiently disruptive that Mayor La Guardia sent telegrams today to both sides volunteering to mediate the dispute after a three-hour conference between union representatives and company officials produced no results. Protests outside the store will continue. Expressions of public support for the strikers are appreciated, and will help them win their demands.