Where did the 41 suffragists arrested yesterday while trying to picket along the White House fence spend part of what may be their last day of freedom before their trials tomorrow? Inside the walls of the District of Columbia Jail.

Why? So they could express their support for the suffrage prisoners already there, especially Alice Paul, being held in the jail’s psychopathic ward, and force-fed three times a day for being the “ringleader” of the “Silent Sentinel” White House pickets. 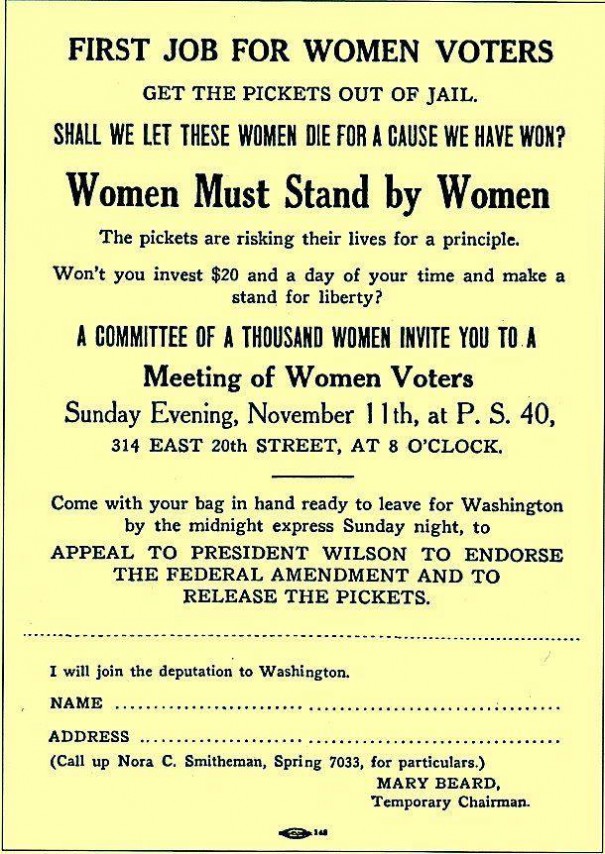 The assembly was not, of course, approved by the warden, but it went forward anyway. Anna Kelton Wiley, Elizabeth Kent and Lucy Burns led their fellow visitors double-file to the warden’s office where they demanded to talk to him. The warden’s wife came to the door and said they couldn’t see him because “the poor man is prostrated,” presumably due to the barrage of telephone calls from the public objecting to the extreme punishments being given to peaceful “Silent Sentinel” suffrage pickets.

The delegation decided they weren’t going to leave without accomplishing their mission, so they fanned out and began looking for Alice Paul, Rose Winslow, and other suffrage prisoners. Soon, someone called out: “There’s Miss Paul … There she is!” A few surprised guards were no match for the determination of the women, so some of Paul’s most ardent supporters rushed by and clustered below her window to salute her. “West Virginia greets you!” “Oklahoma is with you!” “New York salutes you!” were among the first words that rang out.

Despite force-feedings, and sleepless nights listening to the shrieks of patients in the psychopathic ward, Alice Paul seemed as spirited as ever. “Many of you will probably be here tomorrow,” she told supporters. “I want to say to you now that you will find the conditions intolerable. You must make it clear from the first that you are political offenders and demand that you be treated as such. Your number will make it impossible for them to do anything but grant your demands.”

When asked how she was doing, Paul replied, “Oh, I’m all right. I am being forcibly fed three times a day. It is worse than in England. There they feed you only twice. I am able to prevent them from giving me half of what they bring, but I have not the strength to prevent them from forcing me to take some.” She was told to “hold on,” and she assured those below, “Oh, I will.” Then she reiterated, “I want you all to demand that you be treated as political prisoners. That’s what you must do.” They assured her they would.

The guards regrouped, and began pushing the women away from Paul’s window and toward the prison gate. As they passed Rose Winslow’s window they called out to her as well. Winslow told them: “I am resisting their feeding all I can, but I am too weak to put up much resistance. My stomach is resisting, though.”

Officials at National Woman’s Party headquarters are telling of notes that Winslow has smuggled out of jail, calling prison conditions “frightful” and speaking of the torture of force-feeding, in which she and Alice Paul are held down while a rubber tube is forced into their throat and liquid poured in through a funnel. According to Winslow’s note:

Alice Paul dreads forcible feeding. I hate to think how she must be feeling. I had a nervous time of it, gasping a long time afterward and stomach rejecting during the process. Spent a bad, restless night, but otherwise all right …. We are denied food from outside, visitors, clothes, books, many things, so please make that clear. All of the prisoners have made most of the demands we are making, as you know.

In a note to Lucy Burns, Winslow says: “The feeding gives me a severe headache. My throat aches afterward, and I always weep and sob, to my great disgust, because I try to be less feeble. It is horrible. I’m very much interested in seeing how long our so-called splendid American men will stand for this form of discipline.”

The injustice of Alice Paul’s being held in the psychopathic ward became even more outrageous yesterday when it was reported by Lavinia Dock that even Warden Zinkham doesn’t think she belongs there. He reportedly told Dock that “I have never met a more brilliant mind” and that “I shall be a subject for the psychopathic ward myself if there is not a let-up in the flood of protests I am receiving.”

If protests are having such a powerful effect, they need to be kept up, and even increased. The National Woman’s Party is doing everything it can to make sure no one forgets the ordeals being undergone by the prisoners.

Protest meetings against the ridiculously long sentences given peaceful picketers for trivial – even false – offenses, such as allegedly “blocking traffic” on the wide Pennsylvania Avenue sidewalk, are being held all over the country by those who believe that public pressure can put an end to these outrages. A flyer for a meeting in New York City tonight – in a State where women won the vote five days ago – is shown here. Attend if you can, and then go to Washington to demand the release of the suffrage prisoners, and fair treatment for all those who want to exercise their Constitutional right to peacefully protest being denied the most basic right of a citizen in a democracy – the right to have an equal voice in selecting those who pass the laws they are equally compelled to obey.