Today the “Silent Sentinels” who are picketing President Wilson over his failure to support nationwide woman suffrage battled a hostile mob, then were arrested by police – who failed to arrest any of their attackers.

Tonight all 31 suffrage demonstrators are being held in the D.C. House of Detention after refusing to post bail.

The police arrived late at the scene of the near-riot because they hadn’t expected the suffragists to demonstrate today. The protesters had been given “suspended sentences” yesterday for Saturday’s picketing, and knew that Judge Mullowney could recall them to court and jail them at any time if they engaged in further “illegal” activities.

But the pickets would not be deterred from taking up their posts along the fence near the White House gates. They marched from Cameron House, the National Woman’s Party’s headquarters, with their colorful suffrage banners held high. Things went calmly for a while, but once the government employes began leaving work, the small audience of passers-by turned into a large hostile crowd. A few boys then began stealing and tearing the banners, at which point the situation deteriorated rapidly. Police were called and eventually restored order, but only after taking the peaceful protesters into custody and off to jail in patrol wagons. They will face Judge Mullowney again tomorrow.

Meanwhile, the ordeals of Alice Paul and Rose Winslow continue in the District Jail. Paul has been there since October 22nd, serving sentences totaling seven months for her part in the picketing, which has been going on since January 10th. She began a hunger strike on November 5th, and has been force-fed three times a day since November 8th. Today she finally got a visit from the lawyer for all the pickets, Dudley Field Malone. It was necessary for him to go to the Supreme Court of the District of Columbia to compel the warden to produce Alice Paul so that he could confer with her. Malone said afterward:

Miss Paul and Miss Winslow both are very weak and are being forcibly fed. They are resisting food as a protest against the failure of the Government to treat as political offenders women who are arrested for demanding the passage of the Federal suffrage amendment.

I was shocked to find that Miss Paul, because she is the leader of the National Woman’s Party, has been singled out from among the other suffragists and transferred to the psychopathic ward, in spite of her demand first to see her personal physician and her attorney.

Miss Paul is imprisoned in a room in the midst of insane patients, whose shrieks she can hear day and night. For fear she may not hear them the door of her room has been taken off. One of the windows has been boarded up with heavy wooden shutters, and the other one cannot be opened to let in air, so that most of the air must come from the inside halls of the building. Against her protests, alienists have repeatedly been sent to interview Miss Paul and have even brought with them a stenographer to take down what she says.

I talked with Miss Paul for an hour and a half, and she is more sane than any of the administration officials who have been responsible for this outrage. I demanded of the Warden that this malicious attempt to discredit Miss Paul’s leadership and to reflect on her sanity in placing her in the psychopathic ward, surrounded by maniacs, cease at once, and that she be removed forthwith. If this is not done, I shall appeal to the court for relief from this unspeakable situation.

It is time that the sportsmanship and gallantry of American men and that the humanity and political power of the women voters of the State of New York and of the Western States spoke out against this conduct of the Government. 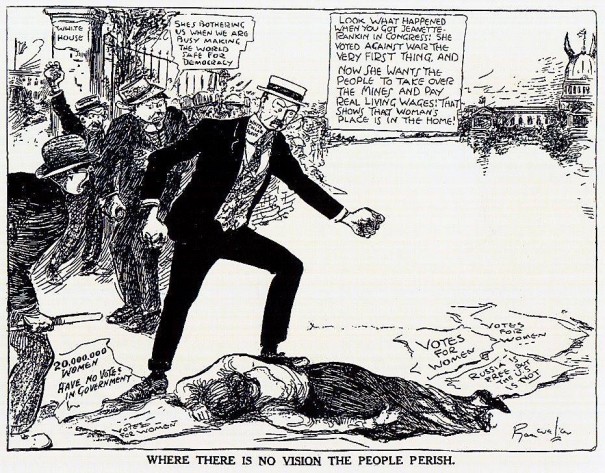 Though only Alice Paul and Rose Winslow are being force-fed, they are not the only suffrage pickets in the D.C. Jail, and the number of imprisoned suffragists may increase dramatically tomorrow. So while today is the one-week anniversary of a major triumph – women winning the vote in New York State – the battle nationwide is far from over, and things may get a lot tougher for the “Silent Sentinels” very soon.