Sixteen of the suffragists imprisoned in Occoquan Workhouse are continuing the hunger strike they began upon arrival on the evening of the 14th.

But their condition has now become so serious that according to Mary Short, who was just released today, Superintendent Whittaker has asked for permission to grant their demand to be treated as “political prisoners.” If true, this would be quite a change from Whittaker’s original view that they could “commit suicide” if they wanted to, and that he would not force-feed them to keep them alive, or give them “political prisoner” status.

According to Short, the strikers are all in a quite weakened condition but still able to get around, except for Dora Lewis, who can no longer move unassisted. Lewis was knocked unconscious on the night she arrived after striking her head on an iron bed frame when thrown into her unheated punishment cell by guards. Another suffrage prisoner, Anna Kelton Wiley, who was being held in the District Jail, was released on bond today pending an appeal of her conviction. Alice Paul and Rose Winslow are in the hospital ward of that facility, and being force-fed three times a day, an ordeal that began three days after they began a hunger strike on November 5th.

Meanwhile, the “antis” are questioning the patriotism of suffragists and linking the suffrage movement with pacifism and socialism. Yesterday, Alice Hay Wadsworth, wife of New York’s senior Senator, and president of the National Association Opposed to Woman Suffrage said in an appeal sent out nationwide:

The New York suffrage victory may prove a means of arousing the people of America to the peril of woman suffrage. An analysis of the New York vote shows that suffrage was carried there by pro-Germans and pacifists. The inclosed statement proves this clearly. Therefore, suffrage in New York has raised a greater issue than ever before.

It has helped suffragists in their efforts to force the Federal amendment. The next step after the Federal amendment would be the demand for a referendum – to men and women voters – on this war! Nothing could so divide our country or help the Kaiser. With Russia and Italy defeated by internal discord and socialism, every patriotic American must be brought to realize that doubling the electorate at this time might lead to defeat in this war. We must arouse every real American man and woman to this menace of the triple alliance – socialism, suffragism, pacifism. Will you add the weight of your influence to carry these facts to the people of your State? ALICE HAY WADSWORTH.

Today, suffragists expressed indignation at Wadsworth’s charge. “Does she think President Wilson is pro-German?” Gertrude Foster Brown asked. “Does she think Theodore Roosevelt and Secretary McAdoo are pro-German? Does she not realize that President Wilson asked the men of New York to vote for suffrage as part of the battle for democracy and that it was in that spirit they responded?” 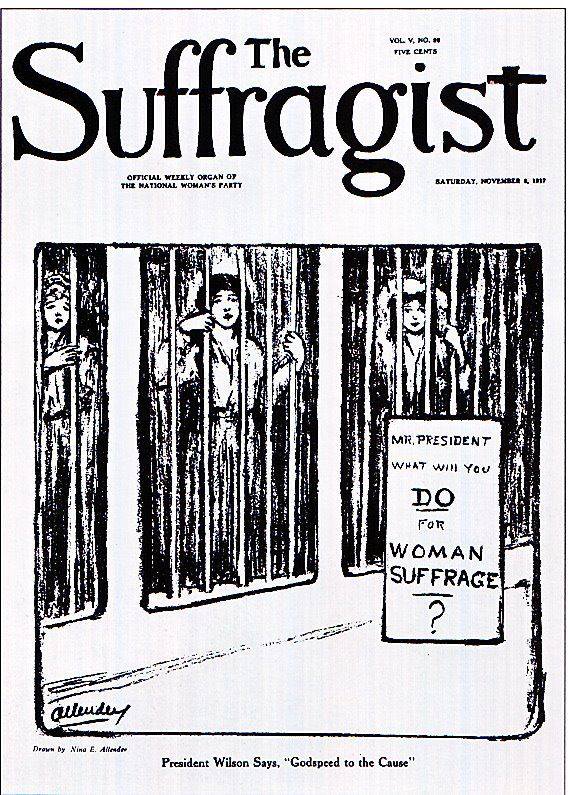 “It is an insult to loyal women who have done massive war work to intimate that the suffragists constitute a pro-German body or that we suffrage adherents do,” she went on to say.

Brown then turned the tables and wondered how Wadsworth’s statement might be viewed in the foreign press. “Does she think the reckless imputation of divided loyalty in New York State is helpful to this country in time of war? Is her patriotism so poor she is willing to befoul her own nest in this reckless and irresponsible manner?”

The battle for suffrage continues on many fronts, and tomorrow the New York State Woman Suffrage Party opens its convention. Coming just two weeks after New York women won the vote on November 6th, optimism is high about winning suffrage nationwide, so the goal of delegates gathering for the convention at New York City’s Ritz-Carlton is “Votes for All in Two Years.”

Cartoon: The cover of a recent issue of the National Woman’s Party’s official publication, “The Suffragist.” The drawing is by Nina Allender, and it shows suffrage prisoners asking: “Mr. President, What will you DO for WOMAN SUFFRAGE?” The caption at the bottom is: “President Wilson Says, ‘Godspeed to the Cause.’ ” The National Woman’s Party sees President Wilson’s endorsement of suffrage on a State-by-State basis, but his unwillingness to endorse or lobby Congress for the only realistic means of achieving it nationwide – the Susan B. Anthony Amendment – as insufficient. Many suffragists are now serving time in jail for displaying banners along the White House fence highlighting the hypocrisy of Wilson’s vigorously working to bring democracy to every other country, but not doing what’s needed to bring it to the female half of his own nation.