The New York State suffrage campaign is coming to an enthusiastic and optimistic finish with just two more days remaining until the vote.

In a statement issued today, Carrie Chapman Catt said, “In the name of the 2,000,000 women who comprise the National American Woman Suffrage Association, and who are straining their eyes toward the great promise of victory in New York State on Tuesday, I ask you for woman suffrage.” Referring to a giant petition containing 1,035,000 names, she went on to say:

Remember that more than 1,000,000 of your mothers, wives, sisters, and sweethearts want you to vote for it, and have said so over their signatures. Remember that our country is fighting for democracy, ‘for the right of those who submit to authority to have a voice in their own government.’ Vote for woman suffrage, because it is part of the great struggle toward democracy. Vote for it as an earnest of our country’s sincerity, when it says that it fights for democracy.

A seasoned veteran of suffrage campaigns in New York and three other States in 1915, Rabbi Stephen S. Wise is still as dedicated as he is eloquent. Speaking in Carnegie Hall to the Free Synagogue today, he addressed and demolished every anti-suffrage argument one by one, and said that now is the time “to right a great moral wrong.” He expressed no sympathy for male anti-suffragists:

If we continue to disenfranchise the women, it will be because of the meanness and want of elementary generosity of the men. The men who vote against suffrage are cowards. They are guilty of cowardice, because they know that whether the women get the vote or not, these women will continue to do their duty by their families and by their country. So far as the men are concerned, they lose nothing by depriving the women of the vote. But democracy loses, and will continue to lose, as long as men continue to perpetuate this injustice.

The argument that equal suffrage will weaken the strength of our Government is an argument against democracy, and an argument for just that kind of Prussianism which we are now fighting against. Before we can make the world safe for democracy we must de-Prussianize our own country by admitting the women to the franchise to which they are entitled.

To the argument that women in suffrage States have not yet succeeded in curing all political ills, he reminded those present that “not more than 30 per cent of the women are voting today, and yet they are expected to improve government. If woman suffrage has not purified politics already, it is because men have made politics so unclean, so filthy, that it will take 100 years of deodorizing cleanser in the hands of the women of America to make politics clean.” 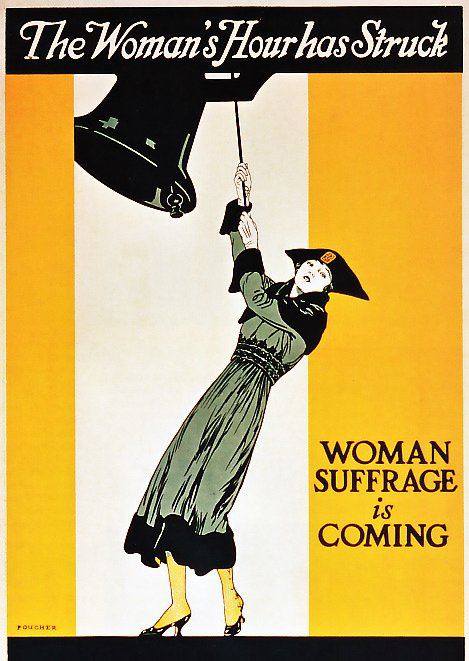 Meanwhile, the Woman Suffrage Party gave out a letter today that shows great support for woman suffrage among our soldiers, contrary to the claims of Everett Wheeler and other anti-suffragists. It began:

Company ‘K’ of the Seventy-first New York Infantry wishes to go on record to say that its every member is in favor of woman suffrage. And allow us to tell you swivel chair polishers of the Man Suffrage Association that the real red blood of this country, the men who are today in khaki, are better able to judge whether or not the women of this country shall share the privilege of the franchise. We, who have sacrificed our positions, in order to better serve our country and have offered our lives that the same country might be safe and that democracy shall be made safe for the world, have seen, realize, and appreciate what the women of this country have been willing to do for us.

Through their powerful influence, laws for our betterment have been enacted. And, by the same token, we, the men of the United States Army, look forward to that same potent influence to cause proper protection for the wives and children that we are about to leave behind. We look forward to these future female legislators to properly enact laws so that our progeny may be educated and raised in a manner that shall be a monument to the sacrifice we are today making.

Vira Boarman Whitehouse, head of the New York State Woman Suffrage Party, is expressing confidence as well: “We have made a careful canvass of the State and we find that the sentiment is strongly in favor of the proposed suffrage amendment.” Recalling the election of 1915, and equally optimistic predictions by suffrage leaders before a similar measure was rejected by New Jersey, New York, Massachusetts and Pennsylvania, she said, “We realize, of course, that many of the voters may express themselves on one side of the question and vote on the other, but in several cities men of affairs have altered their opinion since the last election. Mayor Stevens of Albany is one of these, and mayors of six other cities up-State have similarly expressed themselves.”

Though the outcome won’t be known for at least 48 hours, the kind of unprecedented organizing that’s gone on, and the high degree of support for suffrage that’s being expressed by prominent individuals, as well as by average voters in straw polls, has made for a good deal of justifiable optimism. But no one in any suffrage headquarters has forgotten what happened two years ago, or seems overconfident enough to ease up in their efforts until after the last polling place closes day after tomorrow.