The National Woman’s Party is known for its bold actions, but today’s attempt to briefly occupy the Senate as a colorful protest was its most militant tactic yet.

As announced day before yesterday:

Monday noon, upon the convening of the United States Senate, a group of women will form upon the plaza in front of the Capitol and, with no banner other than the American flag at their head and the tricolor of women’s freedom, will march up the Senate steps through the foyer and on to the floor of the Senate.

They will carry in their hands the speeches on democracy, which have been made by the thirty-four men who voted against democracy for women. In the flame of a torch carried just behind the flag these speeches will be burned. Drawing up their line in front of the presiding officer’s desk, each woman, representing a different group of women, will voice her protest against the injustice done in the cause of liberty by the men who defied Wilson’s appeal for the war measure of woman suffrage. One will be a woman voter from the West, another a working woman representing the millions of women now in industry; others will be young girls representing the women of the future.

Alice Paul noted the double standard involved in regard to men and women seeking democracy:

To remedy the wrongs that are done men it is believed right that whole nations should perish, if need be. To remedy the insult that is done woman by the men who lay the scorn and burden of disenfranchisement upon her it is considered wrong to hold a banner of protest on the steps of our Capitol. Where else are women to go for redress of their grievances, if not to the seats of power? If we cannot make our protests seen by our banners, we will make them heard by our voices in the Senate ; but we will not let it be said of women that they acquiesced in the defeat of justice and liberty. 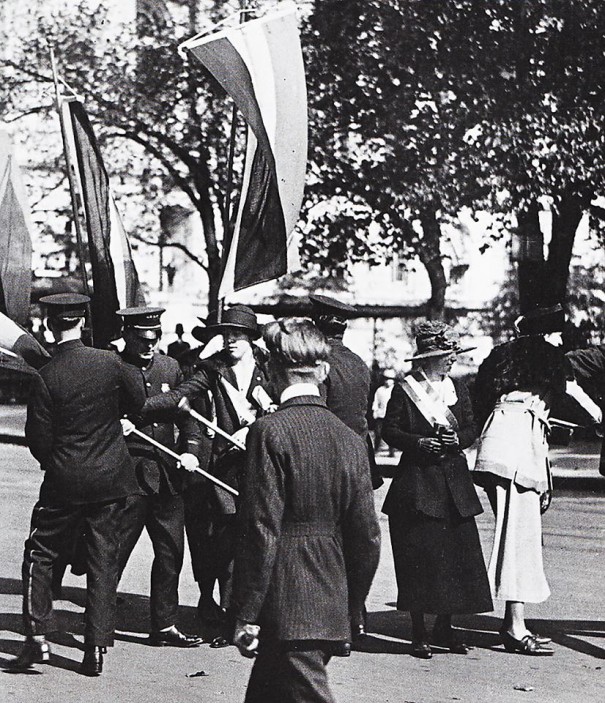 True to their word, the National Woman’s Party protesters started for the Capitol today, with the American flag and the party’s purple, white and gold banners flying. But they were stopped by a squad of Capitol police awaiting them. First, their banners were seized. Then Alice Paul and 14 other marchers were quickly arrested – in an unnecessarily rough manner – and placed in the guard room of the Capitol. None of the detainees have been allowed to communicate with anyone, not even their lawyers, or pro-suffrage Senators, and they are being held without any charges being specified.

The words that would have been burned during their occupation were those of Senators who lavishly praise bringing democracy to all other nations, while voting to withhold it from the women of their own country. “The work that we are called upon to do when we enter this war is to preserve the principles of human liberty, the principles of democracy, and the light of modern civilization,” said Senator Henry Cabot Lodge, Republican of Massachusetts. Senator William Borah, Republican of Idaho added, “This is a war that speaks for the majesty of people popularly governed.”

“When you undertake to erect a structure of democracy it must be founded upon the four pillars of justice, equality, fraternity and liberty,” said Senator John Sharp Williams, Democrat of Mississippi. Senator James A. Reed, Democrat of Missouri also spoke out in support: “This is the people’s country. The nearer you get to the people, the nearer you have a just and fair government.”

At some point the protesters will presumably be released, and will continue their daily showing of banners near the Capitol, often inscribed with the words of those who say they favor democracy but vote against it when it comes to women. Fortunately, some members of the current Senate may soon be replaced following the November elections. If two votes are gained, there will be 64 Senators for suffrage and 32 opposed, and the Susan B. Anthony (nationwide woman suffrage) Amendment will go to the States for ratification after it is re-approved by the new House, and approved for the first time by the Senate.