That’s the motto of suffrage organizations who are undertaking a bold gamble to expand “Votes for Women” out of the West and capture four big Eastern States, with New Jersey voting first. Though women in Illinois have almost equal suffrage, and can vote for President and local offices, but not Statewide offices, at present there is no State to the east of Kansas where women can vote on the same basis as men.

But the movement has grown considerably in recent years, and confidence is now running so high that major campaigns are being waged in New Jersey, New York, Pennsylvania and Massachusetts. The vote in New Jersey is just four days from now, and a victory here would certainly give a boost to the cause just before the (male) voters in the other three States vote on November 2nd. These four States contain 24.6% of the population of the United States, and could suddenly more than double the number of women voters, so this is an all-out effort.

New Jersey is unique, in that it was the last place in the U.S. where women had the right to vote prior to Wyoming’s enfranchisement of women in 1869. Those who owned a certain amount of property, regardless of their gender or race, were allowed to vote here from 1776 until 1807, when the Legislature passed a law restricting the vote to white males, with the restrictions against women still on the books.

There have been 4,000 outdoor and 500 indoor meetings held around the State arranged by four paid and thirty volunteer organizers of the New Jersey Woman Suffrage Association. They work with three other groups in a coalition called the Cooperative Committee, the largest of the three other groups being the Woman’s Political Union of New Jersey, with the Equal Franchise Society of New Jersey and the New Jersey Men’s League for Woman Suffrage contributing to the effort as well. Thus far three million pieces of literature and four hundred thousand buttons have been distributed, so the campaign to re-enfranchise the State’s women has been a mighty effort.

Today both sides were quite active. A group of New York suffragists took time out from their campaign to travel around this State in a horse-drawn wagon converted from delivering lunches into delivering literature to voters. The group was headed by Nora Blatch DeForest, daughter of Harriot Stanton Blatch and granddaughter of Elizabeth Cady Stanton. She was accompanied by journalist Rheta Childe Dorr, Florence Kelley of the National Consumers’ League, and Alice Carpenter, Progressive (“Bull Moose”) Party activist. 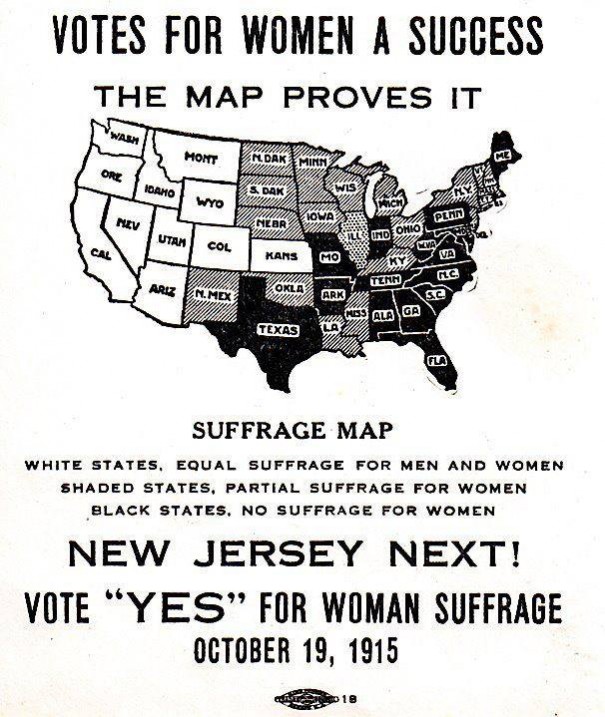 Mina Van Vinkle, President of the Women’s Political Union of New Jersey was at her desk in Newark today, busy making sure there will be enough women poll-watchers to insure a reasonably honest election. She said: “If no underground influences get in their work on Tuesday we will win this election.”

Anti-suffrage forces are, of course, making strong last-minute efforts as well. Today a flyer by W. T. Hickey of Colorado was being distributed locally saying that suffrage in Colorado, where women won the vote in a Statewide referendum in 1893, has been a failure, and that the women legislators there have not been able to bring any benefit to women, and even opposed so-called “protective” legislation restricting women’s hours of work.

In an ominous and disappointing development, the New Jersey Federation of Labor, which in all previous years has endorsed woman suffrage, did not do so this year. The active opposition of James Nugent, Essex County Democratic Chairman, is suspected of being behind the move, due to his close and friendly relations with the liquor lobby, which fears enactment of prohibition laws if women are enfranchised. Bartenders, Waiters, Brewers, Bottlewashers and Cigarmakers all formally came out opposed to suffrage through their unions just prior to the State Federation of Labor’s convention.

The “antis” are employing their best speakers now, with the highest-ranking officers of anti-suffrage organizations in such States as New York, Pennsylvania and Massachusetts coming to New Jersey to make their case. Even the widow of the late Vice President Garrett Hobart, who served during President McKinley’s first Administration, has been drawn into the battle. She said: “Please remember that I am one of the thousands of women in our State who do not want the vote and that I speak for them when I beg you to vote against woman suffrage. We need your vote to prevent what we believe to be a great injustice to us as well as a grave menace to our State.”

But suffragists have powerful speakers as well. Three-time Democratic Presidential nominee William Jennings Bryan and Senator William E. Borah, Republican of the suffrage State of Idaho, will be addressing huge meetings in Newark and Paterson tomorrow night. These aren’t the only attempts by well-known politicians to stir up the voters for suffrage. President Wilson, though still opposed to the Susan B. Anthony (nationwide woman suffrage) Amendment, has also issued a statement of support for woman suffrage in his home State, saying:

“I intend to vote for woman suffrage in New Jersey because I believe that the time has come to extend that privilege and responsibility to the women of the State, but I shall vote, not as the leader of my party in the nation, but only upon my private conviction that as a citizen of New Jersey, called upon by the Legislature of the State to express his conviction at the polls. I think that New Jersey will be greatly benefited by the change. My position with regard to the way in which this great question should be handled is well known. I believe that it should be settled by the States and not by the National Government and that in no circumstances should it be made a party question, and my view has grown stronger at every turn of the agitation.”

Though the four referenda would only enfranchise women in four States, a successful result here on October 19th, then on November 2nd in the other three States, would increase the number of “equal suffrage” States to 15, just one State short of a third of the total, and force the men in Congress from those States to give their female constituents the same consideration and attention as the male voters get now. This would clearly be a boost for the Anthony Amendment, and bring the end of the struggle much closer. But first things first, so “New Jersey Next!”