The campaign to pass the New Jersey woman suffrage referendum three days from now is finishing up in grand style.

According to Bryan, “The burden of proof is on the opponents of woman suffrage. The most convincing argument in favor of it is that a mother has the right to a voice in determining the environment that should surround her children.” He also noted that the character of the opposition should be sufficient to convince anyone to vote pro-suffrage.

Senator Borah, Republican of Idaho, where women won the vote in 1896, said that though he couldn’t claim that women having the vote would eliminate all political evils or injustices, he did think that women would find and correct many wrongs that men have not.

Rabbi Wise looked forward to a more peaceful world after equal suffrage: “‘Military preparedness’ means war, and there will never be a beginning of an end to war until women vote.” He predicted that if suffrage was successful in New Jersey on the 19th, it would also win in New York, Pennsylvania and Massachusetts on November 2nd. 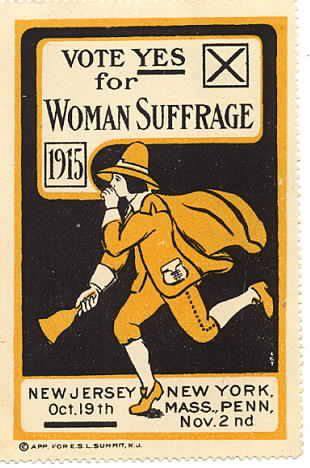 If it does win here, it will be after an uphill fight, because suffrage has very powerful opponents. But Mina Van Winkle, head of the Women’s Political Union of New Jersey has no doubts. “We have made a good fight and we think an effective one,” she said. “If we have an honest election and an honest count of the vote, and if underground influences that we are not in a position to meet do not get in their work on Tuesday, we should win.” Mrs. E.F. Feickert, President of the New Jersey Woman Suffrage Association, not only predicted that suffrage would win, but that it would do so by as much as 25,000 votes:

But Mrs. Edward Yarde Breese, President of the New Jersey Association Opposed to Woman Suffrage, is confident of carrying 13 of the State’s 21 counties. Three of the bigger ones would actually be enough to doom the measure if carried by substantial majorities, and anti-suffragists are predicting a majority of 10,000 in both Essex and Hudson Counties, and 7,500 more in Camden County.

The “antis” have taken surveys as well, and according to Breese, opposition to suffrage is especially strong in rural areas. In one community they claim that 96% of those surveyed were opposed to the suffrage referendum. Both sides concede that Essex County will reject the measure due to the influence of local political boss James R. Nugent. Hudson and Camden Counties are still hotly contested, however.

Woman suffrage in Camden County is gaining rapidly; The President’s declaration favoring it has given the movement new life. The Democratic Executive Committee is on record favoring it, and the vote will be a surprising one for the opponents next Tuesday. The people here are just learning that the liquor interests are fighting it harder than any other power, and had we another month it would carry in Camden County. I hardly expect it to carry in this county, but the majority will be small.

It’s definitely a gamble to try to win so many big States all at once, and to abandon the traditional strategy of making efforts to win suffrage only in States that border on a State where women already vote. But though multiple defeats would be a major setback, the payoff of multiple victories could be huge, and therefore worth the risk.

A win in all four States would mean that not only would equal suffrage have finally spread East of the Mississippi, but would have a strong presence here. Having four suffrage States with large Congressional delegations would certainly increase support for the Susan B. Anthony (nationwide woman suffrage) Amendment, since members of Congress in these States would have to face women voters in all future elections. New York is the nation’s most populous State, with Pennsylvania second. Massachusetts ranks sixth in population, and New Jersey eleventh. Each of the four States with an upcoming suffrage referendum has a larger population than California, presently the most populous suffrage State. So the stakes are extremely high, and well worth this unprecedented effort.