Children will definitely be marching in what’s planned to be the biggest suffrage parade in New York City’s history.

Recently the anti-suffragists accused “Votes for Women” forces of exploiting their children by having them march in their parades, so it had been previously announced that they would not be participating this time. But a backlash occurred among many of the mothers, and so today the policy was reversed. A typical reaction came from Elizabeth Selden Rogers, who had said:

My Betty shall march if there is not another child in the parade. Betty is 9, and she and the children of her age have learned in school about Washington and his fight for liberty, and they are old enough to understand women’s fight for freedom. There is no more reason why children should not appear in the suffrage parade than at the Piping Rock Horse Show or at other social events. They will be much safer in the parade with police protection than on the sidewalks watching with the crowds. 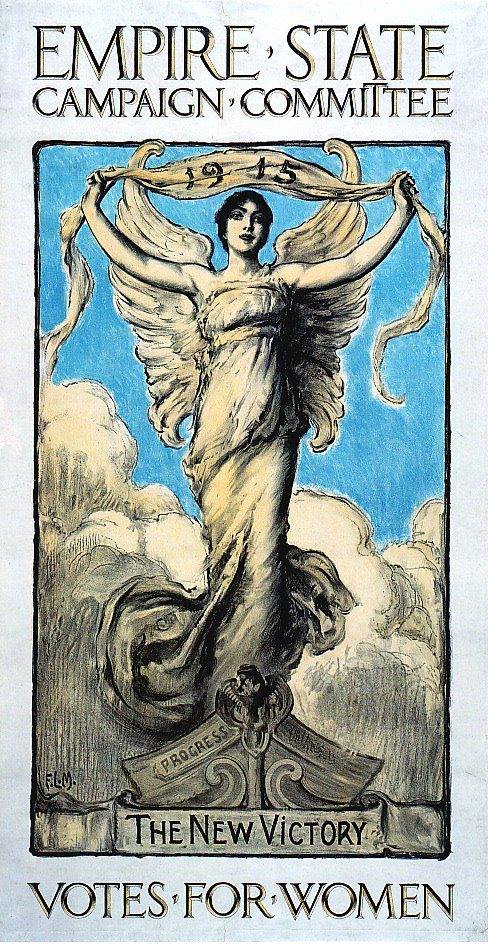 The children’s detachment will fall in line at Twenty-second Street and march to Fifty-eighth Street along the Fifth Avenue route. The girls will be wearing white dresses, white sweaters, white felt parade hats with small green ornaments, and will carry green pennants. Among those in the contingent will be Harriot Stanton De Forest, age 5, great-granddaughter of Elizabeth Cady Stanton.

The parade is expected to be so large, and take so long, that the Women’s Political Union is stockpiling torches for use if the last of the marchers finish their journey after dark. One float – and there will be many – will have 10 elaborately costumed figures representing “Victory,” “Liberty,” “Equality,” “Justice,” and six continents. The W.P.U. will also have a “cavalry division” of women on horses, as well as their famous “Victory Van,” which suffragists used to give out so much literature in the New Jersey campaign. Hopefully it will live up to its name here, even if it failed to do so in our neighboring State day before yesterday. The event should certainly make quite an impression on the male voters of New York, who will vote on a woman suffrage referendum on November 2nd.

Alice Stone Blackwell, President of the Massachusetts Woman Suffrage Association, was optimistic today when asked about the prospects of winning in the Bay State. “Ohio defeated woman suffrage in 1912, but that had no effect on Kansas, Oregon and Arizona,” she said. “The failure in New Jersey does not mean that Massachusetts, New York and Pennsylvania will defeat suffrage. The question is much better understood in this State.”

In Hingham, Massachusetts, the outlook appears particularly favorable. The result of a straw poll of 14 men taken yesterday by the local Equal Suffrage League was revealed today. Twelve of the men surveyed said that would vote “yes” and only two “no.” Both sides have a presence there, with 40 active and 50 associate members in the Equal Suffrage League, though the Anti-suffrage Association is actually larger, with a claimed membership of 150, plus 200 more on their mailing list.

In Pennsylvania, there was a large audience assembled in the Gettysburg Court House this evening to hear suffrage speeches by Beatrice Forbes-Robertson Hale and others. The listeners must have enjoyed what they were hearing, because the room was full when the evening began, and ended the same way. Hale said that the fight was “a movement of progressive persons against conservatism – not a fight of women against men.” In fact, “from the inception of the movement, it has had the support of many fine, chivalrous, far-seeing men.” She noted that the fight for equality has gone through three stages. First came the fight for equal education, then equality in employment, and finally for equality for wives and husbands in the home, and those who opposed the first two steps are now fighting the third.

With less than two weeks left until the vote on the Pennsylvania suffrage referendum, Hale reminded her audience that suffrage has always been earned by actions and never just freely given: “Men won their freedom for themselves and that is why they value it so highly. In the same way we must work for it, we must sacrifice for it, we must give for it. We must remember that George the Third did not hand out independence with each pound of tea; neither can we sit down over our teacups and expect to get it.”

Suffragists in all three States with upcoming referenda are definitely not just sitting around drinking tea and hoping for victory. They’re working very hard for it, and generating unprecedented support. Though the New Jersey vote on the 19th was a disappointment, it certainly hasn’t dampened the enthusiasm of anyone working for a triple victory on November second.