Just eight days to go until New York, Pennsylvania and Massachusetts vote on woman suffrage, so the campaign in the Empire State, like everywhere else, is reaching its peak.

Six thousand five hundred volunteer workers have been here for weeks, and five hundred more are about to be added in Manhattan by the Woman Suffrage Party. The party’s fife and drum corps will open a 12-hour meeting tomorrow morning at 40th Street and Broadway, and they will have a huge rally in Carnegie Hall on Friday night, the 29th. The “antis” will hold their final mass meeting in that same location on Saturday night, and are keeping their headquarters at 37 West 39th Street open until 10 p.m. each night.

The Women’s Political Union has a room in the Tribune Building from which Margaret Stanton Lawrence (women’s rights pioneer Elizabeth Cady Stanton’s 5th child) supervises the many volunteers who work there during the day. Nora Blatch De Forest (Elizabeth Cady Stanton’s granddaughter) comes in at the end of the day to coordinate the work of those who can’t help out until after they’ve finished their day jobs and who work there until late at night. Between them, the two shifts have now sent out mailings to 50,000 voters. Each envelope contains a letter from Harriot Stanton Blatch (Elizabeth Cady Stanton’s 6th child and mother of Nora Blatch De Forest) explaining why voters should approve woman suffrage, and a sample ballot showing them how to do it. The mailings will continue until right before Election Day. The Union intends to outdo the Woman Suffrage Party’s speech making marathon by holding a 24-hour rally with “relays” of speakers beginning Friday, and twenty speakers will be out doing open-air street meetings around the city on Saturday night, the 30th.

There will be a “theater evening” two nights from now, with suffrage speeches and box parties at the city’s most prominent theaters, such as the Globe, Harris, Century, Candler, Gaiety, Lyceum, Hippodrome, Bandbox, Republic and George M. Cohan’s Theater. David Belasco not only offered his theater, but his best wishes as well, saying: “I am with you heart and soul.” 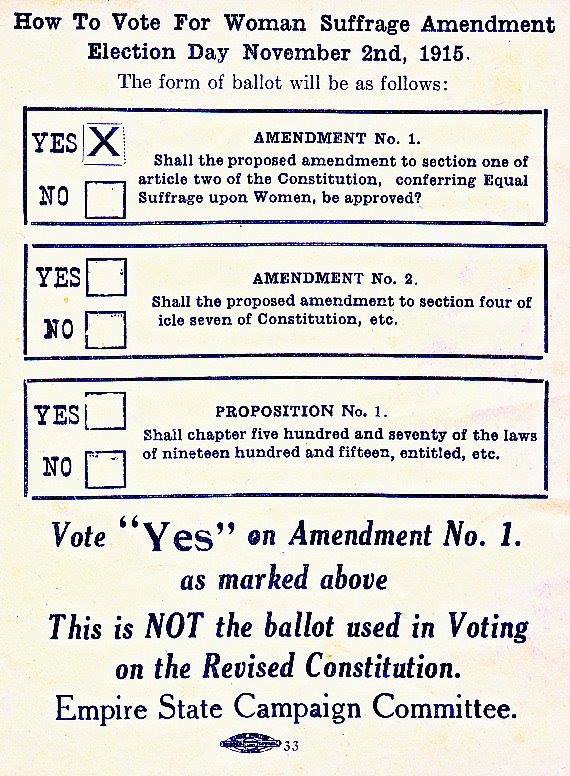 The Publicity Committee of the Empire State Campaign Committee is meeting every afternoon to make sure that each accusation, personal attack and misrepresentation of facts made by anti-suffragists is immediately countered. There seems to be an inexhaustible supply of such propaganda, so the committee has quite a job on its hands. During the New Jersey campaign, it has been reported that one anti-suffrage speaker told a crowd that in suffrage States: “The vote as been taken from the men, and the women have all the offices.” Opponents in New York are proving equally unscrupulous.

One recent example of opposition tactics here is a leaflet circulated by a men’s anti-suffrage group, entitled “Woman Suffrage: Some Underlying Principles and Comments.” It said, among other things, that: “Woman suffrage should be repudiated, because of the type and attitude of the leaders it has drawn to the cause,” then named Carrie Chapman Catt and several others as “accepted leaders.” It then claimed that all these suffrage leaders “are opposed to the doctrine that the family is the unit of society and the State.”

Catt replied that: “The inference from that statement, when taken in conjunction with the context of the rest of the leaflet, is that I hold immoral views and am an enemy to the home and family. I am not. The action of your association in delaying reply and in persistently circulating this libelous leaflet, cunningly designed to mislead, with its implication therein that millions of women who have or desire the vote wish to lead ‘loose’ lives, is rankly dishonorable, and the exact opposite of that chivalry of men to women on which you anti-suffragists claim women can rely for justice.” After first being re-edited yesterday to omit Catt’s name, the leaflet now appears to have been withdrawn, though in an unsigned letter about the controversy, the sponsors of the leaflet still claimed that: “We think the principles advocated by the suffragists injurious to the welfare of the State, and of the family, which latter we consider the unit of civilization.”

Meanwhile, in Pennsylvania, the campaign seems to be centering on the Pittsburgh area. Both sides are quite active in that part of the State, though suffragists seem to have the advantage, due to the use of open-air meetings, something the “antis” don’t do. Mrs. J. O. Miller, head of the Equal Franchise Federation, says: “Our sincere belief is that the Woman Suffrage Amendment will carry in Pittsburgh and Allegheny Counties; that rural districts throughout the State will return large majorities, and that Philadelphia will give at least a small majority that will be favorable.” But Julia Morgan Harding, President of the Pittsburgh Branch of the Association Opposed to Woman Suffrage was equally certain of victory for her side, and thinks the result here will be the same as it was in Pennsylvania’s neighbor, New Jersey, six days ago.

Though many of the young Democrats in Allegheny County support suffrage, the local party is keeping the same “hands-off” policy toward the suffrage amendment in their part of the State as other Democrats – and Republicans – are doing elsewhere. However, one powerful local Democratic politician, Joseph H. Guffey, has said: “I strongly favor woman suffrage. I shall vote to give the women of Pennsylvania the ballot and I shall give them all the personal support in my power.” Most of the newspapers have no reservations about getting involved. Six of Pittsburgh’s eight papers have come out strongly in favor of suffrage, and neither of the other two have come out against it yet, so if the voters read the editorial pages, suffrage should easily carry in the Keystone State a week from tomorrow.

Hard to believe that in just over a week the largest (New York), second largest (Pennsylvania) and sixth largest State (Massachusetts) in regard to population could all be added to the roll of Suffrage States, but if all goes well, that huge leap forward could occur on November 2nd, and add to the already growing impression that “Votes for Women” is an unstoppable force sweeping the nation!