Alice Paul’s “Congressional Union for Woman Suffrage” is now fighting a three-front battle. In addition to its inevitable conflicts with anti-suffrage forces, and its recently declared war on Democrats, who have the power to pass the Susan B. Anthony (nationwide woman suffrage) Amendment in Congress, but have refused to do so, there is now open hostility being expressed toward the C.U. and its militant tactics by the National American Woman Suffrage Association.

Alice Paul was formerly in charge of N.A.W.S.A.’s Congressional Committee, but after coordinating their massive suffrage march in Washington, D.C., on March 3rd of last year, dissension between N.A.W.S.A.’s national leadership and those in its new, “militant” faction grew. So Paul created an independent group, the Congressional Union for Woman Suffrage, in order to pursue her goal of getting the Anthony Amendment approved by Congress and the States using whatever tactics seemed best at any particular time, and which could be implemented without asking N.A.W.S.A.’s approval.

The top priority for the C.U. at the moment is working against Democratic Congressional candidates in the nine suffrage States of the West where women can vote. On September 14th they began sending speakers with carloads of literature to the districts where Democrats will be up for election in November, hoping to get the West’s four million women voters to replace them with Republicans. Another massive shipment of literature for the Western campaign left today, according to C.U. members who spoke to the press at their headquarters tonight. 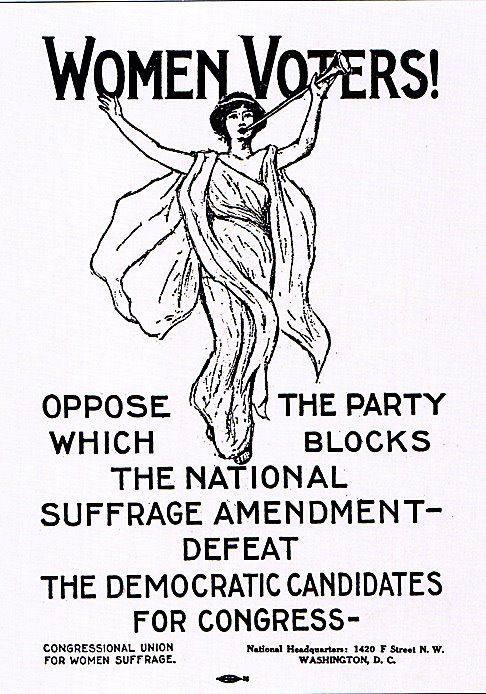 The tactic of holding the party in power responsible for blocking suffrage is one Alice Paul learned from her time in England when she worked with the militants there. But she has certainly given the Democrats a chance to gain her favor. She has sent numerous delegations to meet with President Wilson, but has yet to get any kind of support for the Anthony Amendment, because the President considers women’s voting rights a matter for each State to decide. Meanwhile, in Congress, Democrats continue to block passage of the amendment.

The conflict is escalating because as Alice Paul has become more militant, N.A.W.S.A. has become more conservative. It originally just wanted to postpone pushing for the Anthony Amendment until more States have been won for suffrage, so the women there could pressure their members of Congress to pass it. But in March it endorsed another suffrage amendment as well.

The Shafroth-Palmer Amendment, even if enacted, would not directly grant the vote to any woman, but would mandate a suffrage referendum if 8% of a State’s registered (male) voters petitioned for one. It would satisfy Southern Democrats – the heart of the opposition – who take a “States’ Rights” position, but this is clearly not a realistic path to nationwide suffrage. Paul thinks that Federal action is the only practical strategy, the time is now, and that scarce resources can best be spent putting direct pressure on the small number of men who serve in Congress to pass the Anthony Amendment, rather than trying to convince a majority of the male voters in the 39 States where women do not have equal suffrage to vote in favor of expensive, exhausting and often unsuccessful suffrage referenda.

Needless to say, the conflicts that have become apparent in the suffrage movement have not escaped the attention of anti-suffragists. Mrs. Arthur (Josephine Jewell) Dodge, President of the National Association Opposed to Woman Suffrage said today:

On the one hand we see the Congressional Union, headed by Miss Alice Paul, declaring indiscriminate war against all Democrats because a Democratic Congress has refused to amend the legislation. On the other hand we see Dr. Anna Shaw, President of the National American Woman Suffrage Association, repudiating all connection with the Congressional Union, and even going so far as to announce that the Union is not a member of the National Association.

… From Kansas, Miss Cora G. Lewis, a member of the Kansas Board of Administration, wired Dr. Shaw last Tuesday asking whether two representatives of the Congressional Union working in Kansas had the endorsement of the National American Woman Suffrage Association. Dr. Shaw’s response was an emphatic negative. The truth of the matter seems to be that the country is confronted with the spectacle of several bands or groups of women quarreling among themselves, unable to determine whom they shall oppose or what they shall advocate, making speeches that contradict each other, and altogether creating a confusion which, in its final results, will wreck an altogether futile propaganda.

But interestingly enough, at the same time Dodge was writing another obituary for the suffrage movement, it appears on the verge of inheriting great wealth. It was learned today that Carrie Chapman Catt has been named trustee of a large fortune left by the late Miriam Leslie. The money – estimated at somewhere between one-and-a-half and two million dollars – is to be spent as Catt sees fit in the interests of woman suffrage.

Though it is expected to take a while for Leslie’s will to work its way through the courts, once the money is released for distribution, it will give a huge financial boost to suffrage advocates. At the very least it will make for a much more even match between suffragists and their opponents, who benefit from generous contributions by liquor interests fearful of prohibition laws being enacted if woman suffrage wins.