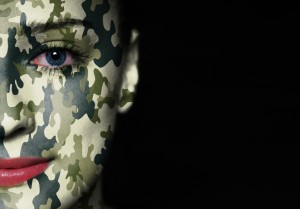 Four female service members, represented by the American Civil Liberties Union, filed a federal law suit in San Francisco Tuesday afternoon to end the Pentagon’s ban on women serving in direct combat jobs. The lawsuit alleges that due to the ban women who have been attached to male combat units and have seen combat as a result of the nature of their missions are currently denied the same access that the men they served alongside have to combat leadership schools or positions that could lead to promotions. The four women plaintiffs have all served in Afghanistan or Iraq under combat conditions, and two are Purple Heart recipients.

Major Mary Jennings Hegar, one of the plaintiffs, said in a press release for ACLU, “The ability to serve in combat has very little to do with gender or any other generalization. It has everything to do with heart, character, ability, determination and dedication. This policy is an injustice to the women who have come before us and who continue to put their lives on the line for their country.” Major Jennings Heger has served three tours in Afghanistan and has been rewarded the Purple Heart.

This is the second federal law suit against the combat ban this year. In May, Two female soldiers filed a lawsuit charging that the military’s ban on women in combat is unconstitutional and violates their equal protection rights under the Fifth Amendment.

Currently, there are 238,000 jobs – about one-fifth of the regular active-duty military – that are off-limits to women. In February, the Pentagon announced a new policy that would open up more positions to women but the policy continues to prohibit women from infantry, armor, and special-operations units. Women make up about 14 per cent of the active-duty military. About 150 women have died in Iraq or Afghanistan.