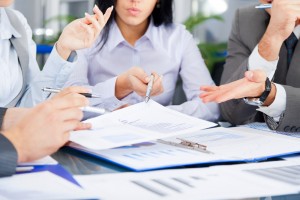 According to a new study released by the Harvard Business Review, women who are members of corporate boards face significant barriers in their positions because of their gender.

The study, based off of a 2010 survey of almost 300 women and 100 men, sought to determine why there are so few women on the boards of Fortune 500 companies. Women only held 16.6% of board seats of Fortune 500 companies in the United States in 2012, a number that has remained relatively consistent in the past six years. Worldwide, women only made up 10% of corporate board members.

In their research, Harvard Business Review discovered that often women had to be more qualified than men in order to be appointed to a board. On average, 68% of women directors were in lead roles such as President or CEO compared to 51% of men directors. 77% of women directors held an operational role compared to 69% of men directors, despite operational experience being listed as a top quality by both women and men in the survey. “These findings suggest that to receive invitations to boards, women might need to be more accomplished than men,” the researchers said.

In addition, researchers found that women faced gender bias from fellow board members when they were finally appointed. Despite half of the male survey participants saying that female board members did not face any additional obstacles because of their gender, 86% of female respondents felt they have to overcome gender barriers in their position. Researchers found that the barriers reported fell into one of four categories: not being heard or listened to, not being accepted as an equal, establishing credibility, and stereotypes of women’s expected behavior. In the survey, researchers highlighted responses such as “I have to yell for them to hear me” and “I have to establish my credentials over and over; it never stops.” They also included an anecdote from one female respondent who has been repeated pulled aside by the CEO and other board members and told she needed to be “less vocal.” This even occurred during meetings, with one director interrupting her questions and exclaiming, “You’re behaving just like my daughter! You’re arguing too much-just stop!”