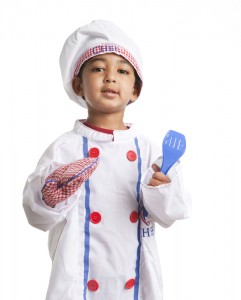 Toy company Hasbro will release a gender-neutral Easy-Bake Oven at the Toy Fair in February after meeting with a thirteen year old girl who sparked an internet outrage over the toy.

McKenna Pope from Garfield, N.J. created an online petition that gathered over 40,000 signatures after she went shopping for an Easy Bake Oven for her little brother, Gavyn. Feeling that the company’s stereotypically advertising and design discouraged boys from cooking, she decided to urge the company to provide more gender neutral designs and advertising. Pope even had cooking celebrities such as Bobby Flay support her petition.

“I’m sure there are a lot of kids out there like my brother who want Easy-Bake ovens but don’t ask for them because they’re told they’re not supposed to want them,” Pope told CNN. “There’s a lot toys specifically marketed towards boys and girls, but guys need to learn to cook and take care of children, too.”

After hearing of the petition, Hasbro invited Pope and her family to the company headquarters in Pawtucket, R.I. where they showed Pope and her brother a neutral prototype the company developed over the past 18 months featuring blue, black, and silver designs. Hasbro also showed the family design concepts featuring boys in ads for the toy.

Pope told reporters after the meeting, “I think that they really met most or even all of what I wanted them to do, and they really amazed me.”

The gender-neutral Easy-Bake Oven is anticipated to be available in the summer.

Toddler Dressed as a Chef  from Shutterstock