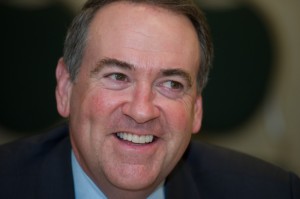 In his segment on Fox News on Saturday, former Governor Mike Huckabee blamed the elementary school shooting in Newton, Connecticut on America’s systematic rejection of religion as evidenced by “tax-funded abortion pills.”

Huckabee back-tracked on comments he made Friday when he linked a lack of religion in schools to the massacre earlier that day. After stating that bloggers “jumped to the conclusion that I said if we had prayer in school the shooting wouldn’t have happened,” he insisted “I said nothing of the sort.” He continued “It’s far more than just taking prayer and Bible reading out of schools.”

Huckabee then cited contraception coverage and LGBT individuals as evidence of his theory that the rejection of religion leads to tragedies such as Newton. “Christian-owned businesses are told to surrender their values under the edict of government orders to provide tax-funded abortion pills,” he said, “We carefully and intentionally stop saying things are sinful and we call them disorders. Sometimes, we even say they’re normal. And to get to where we have to abandon bed rock moral truths, then we ask ‘well, where was God?’ And I respond that, as I see it, we’ve escorted him out of our culture and marched him off the public square and then we express our surprise that a culture without [God] reflects what it’s become.” Watch the video here.