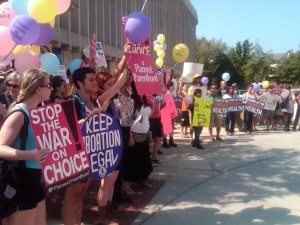 By Campus Organizer Sarah Shanks. This post was originally posted on the Feminist Campus Blog.

In Virginia, abortion clinics might begin closing at an alarming rate due to legislation requiring they be regulated like hospitals. In March, Governor McDonnell signed SB 924, a bill that classifies women’s health centers in the state as a category of hospitals, making them subject to new regulations created by the Department of Health. These laws are called “TRAP laws,” which stands for Targeted Regulations Against Abortion Providers.

The measure forces the state’s 21 clinics to meet rigorous standards—such as wide hallways and tall ceilings—that aren’t required of other medical practices that perform invasive and often more dangerous medical procedures, such as dental surgery, plastic surgery, or colonoscopies. These regulations, which single out women’s health centers, sparked the formation of Virginia Coalition for Women’s Health, a statewide coalition of health care providers and women’s health advocates. The coalition is hoping to reach out to Virginia law makers and communities to educate the public about this issue, as well as fight this legislation.

The day before the Board of Health is set to vote on these regulations, the Coalition hosted a Speak Out at Virginia Commonwealth University (VCU) in Richmond to show support for women’s access to reproductive health care. Over 200 people showed up to the Speak Out to show their commitment to choice and access to reproductive health care for all. The energy and sheer number of people protesting these regulations was staggering, as you could hear the crowd yelling various pro-choice chants throughout the event. There was a diverse pool of speakers that came out, including Virginia state delegates Charniele Herring and Katherine Waddell, VCU students, and other reproductive rights advocates. One student, Natasha Yingling, spoke passionately, saying, “Women like me who are uninsured will be left with no care. At what point do the pro-life leaders start caring about women’s lives?”

Several Feminist Majority Foundation representatives helped organize the rally and were in attendance yesterday. Pro-choice signs and balloons were prominent in the Compass Circle, where the Speak Out was held. Although a few anti-abortion rights advocates came to the Speak Out, their voices and signs were barely audible or visible behind those of the pro-choice supporters. Passing students and community members were given the opportunity to fill out petitions urging the governor to stop this political game jeopardizing women’s health.

The Board of Health will vote on these regulations today starting at 9:00 am at the Wyndham Richmond Airport Hotel. Various medical professionals and community members will attend to urge the Board to consider the detrimental impact such regulations would have on women’s access to healthcare. The pro-choice community will also be present at the event as evidence of the vast number of people who are against these regulations. We hope that the Board of Health will see that the regulations are unnecessary and medically unsound.

There will also be another rally on October 15th to shed light on the issue and urge the governor to listen to his constituents about women’s health. It will be at 1pm in Monroe Park near VCU’s campus. To learn more about the TRAP laws, the October rally, or to sign the petition, please visit coalitionforwomenshealth.org. We have to do all that we can to fight these legislative anti-choice tactics and show our government that we will not stand for rolling back women’s rights, including our right to make decisions about our own bodies.