Hundreds of Equal Rights Amendment supporters converged on the West Lawn of the Capitol Saturday to renew the fight for full equality for women in the US Constitution.

Veterans and military sexual assault survivors kicked off the ceremony with an emotional reading of fallen female soldiers from the Vietnam War until now.

“It never rains on the spirit of equal justice!” Feminist Majority President Eleanor Smeal, the keynote speaker, told the crowd. Smeal took the stage to loud cheers and chants: “Ellie! Ellie! Ellie! Ellie!” Scores of “ERA umbrellas” dotted the lawn, at times shielding the crowd from heavy midday rain. The symbol fittingly underscored the idea that existing anti sex discrimination laws still need the umbrella protection of the ERA to insure their survival.

“We are determined to have equality,” said Smeal. “The present laws simply aren’t adequate.” Smeal pointed to the courts’ tug of war with women over a host of issues like abortion, comprehensive reproductive health care access, equal pay, and violence against women.

Minnesota State Senator and Senate President Sandra Pappas also called for the end of nickel and dime fighting for women’s rights. “We wouldn’t have to, if we had the umbrella,” she paused, waving her own raspberry painted umbrella, “of the ERA.”

North Carolina native and 13-year-old activist, Madison Kimrey, directed attention to the targeted disenfranchisement of women, people of color, and low-income voters in the south–just one of the realities that the Moral Mondays Movement works to bring to light. Kimrey said some of her state’s legislators have attempted to undermine her message and her youth. She said one even, “called me a prop.” But the activist boldly and rhetorically responded, “My vagina is not a prop.”

Monica Raye Simpson said, “It’s time for a new South!” The Executive Director of Atlanta-based SisterSong Women of Color Reproductive Justice Collective also laid out the particularly harmful impact of anti-woman laws and voter disenfranchisement on people of color in her region. She pointed to frightening statistics that evidence a maternal mortality rate among African American women in the US that far exceeds any developed nation.

Nearly every speaker, in some way, called for the crowd to heed the message on the rally’s banner: “Remember in November.” 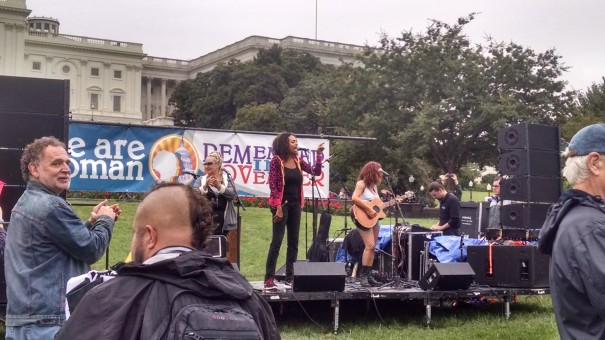 Diana Danis, co-founder of Changing Governmental Gender Paradigms, summed up the day’s event with a simple plea: “We want our 24 little words!”

The We Are Woman Constitution Day Rally was sponsored by We Are Woman, the ERA Coalition, and Progressive Democrats of America.