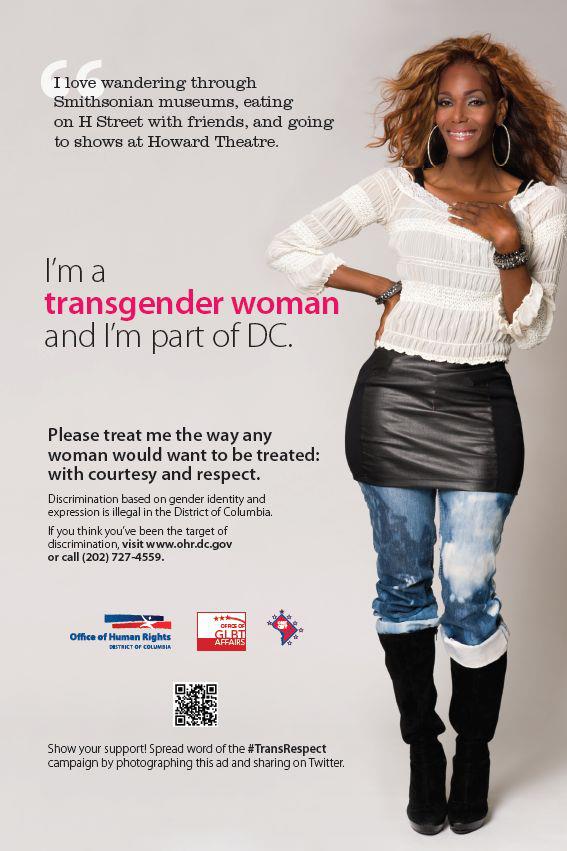 The District of Columbia’s Office of Human Rights launched a Transgender and Gender Identity Respect Campaign last week with the aim of  “promoting respect for the District’s transgender and gender non-conforming communities.” This is the first government funded campaign of its kind.

The campaign includes a series of print PSAs featuring transgender and gender-non-conforming Washingtonians.  Each ad emphasizes the idea that every person should be treated with courtesy and respect.

“[It] is an important piece of a larger effort by my administration to ensure all residents have equal access to employment, housing and public services and accommodations regardless of gender identity or expression.”

The TLGB community and their allies in the DC region have been demanding more action from the city in combating discrimination and violence against transgender and gender-non-conforming communities in the face of discrimination and violence. Anti-TLGB violence in the DC metro region is a serious problem in need of serious attention and solutions.  Last summer, DC made national news for a spree of shootings targeting the transgender community.

While violence and discrimination against the TLGB community in DC has been alarming, the city is certainly not an outlier. The National Gay and Lesbian Task Force and the National Center for Transgender Equality surveyed nearly 6,500 transgender Americans for their National Transgender Discrimination Survey (2011).  Lisa Mottet, a co-author of the final report on the survey, said:

In the DC area specifically, the prostitution-free zones that legislators were adding to and adjusting in January of this year create institutionalized discrimination against transgender individuals (mostly women).  As Alison Gill, a member of the DC Trans Coalition, stated:

“Since passing the laws allowing for the creating of prostitution free zones in 2006, these zones have been used to harass and criminalize trans people and shatter trans communities. Although both the police orders implementing prostitution free zones (PFZs) and on transgender people prohibit profiling, we know from community experience that profiling trans people as sex workers is a prevalent occurrence. This attitude is reflected in both the violence committed by police against the trans community, and in some cases, even expressed directly. Due to the lesser burden of proof required by PFZs, police are able to turn general suspicions that trans women are prostitutes into arrests. In effect, trans women are banished from given areas of the city at the police chief’s discretion. Many of this past year’s violent attacks on trans women have happened in or near these profiling zones. The simple fact is that rather than eliminating prostitution, PFZs facilitate bad or lazy police work and lead to the harassment of trans women.”

I am excited about this campaign because it represents a significant step forward in the effort to create a culture of equality. However, a vital component of cultivating a culture that respects transgender and gender non-conforming individuals is creating a legal system that respects and supports them. I hope DC continues moving forward on this issue and other cities around the country start to wisen up and follow their lead!

Take part in this movement by taking pictures of the PSAs as you encounter them throughout the city and posting them on Twitter with the hashtag #TransRespect. You should also become a fan of the DC Office of Human Rights on Facebook to show them you dig what they’re doing! 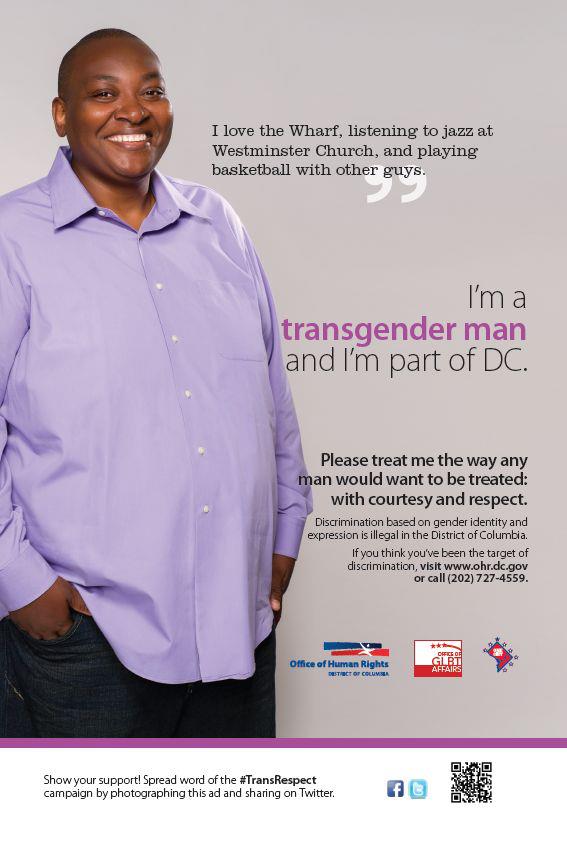 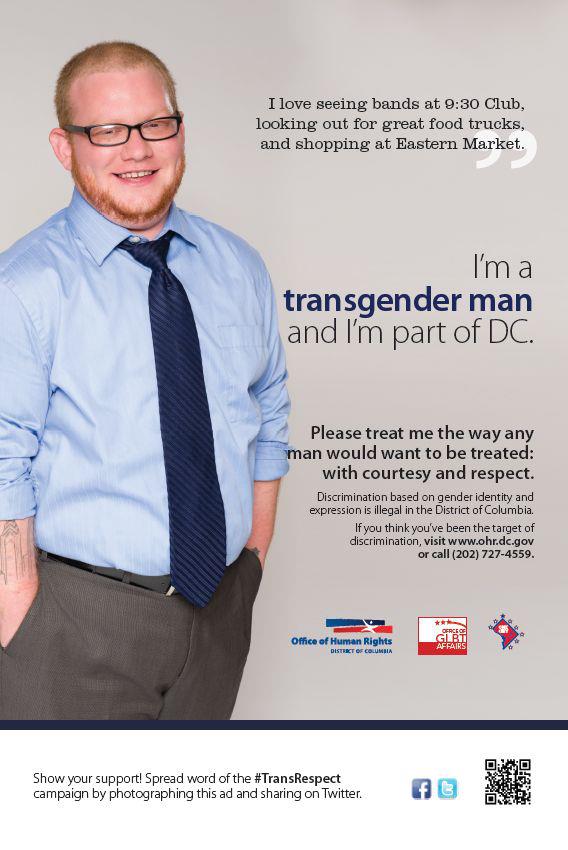 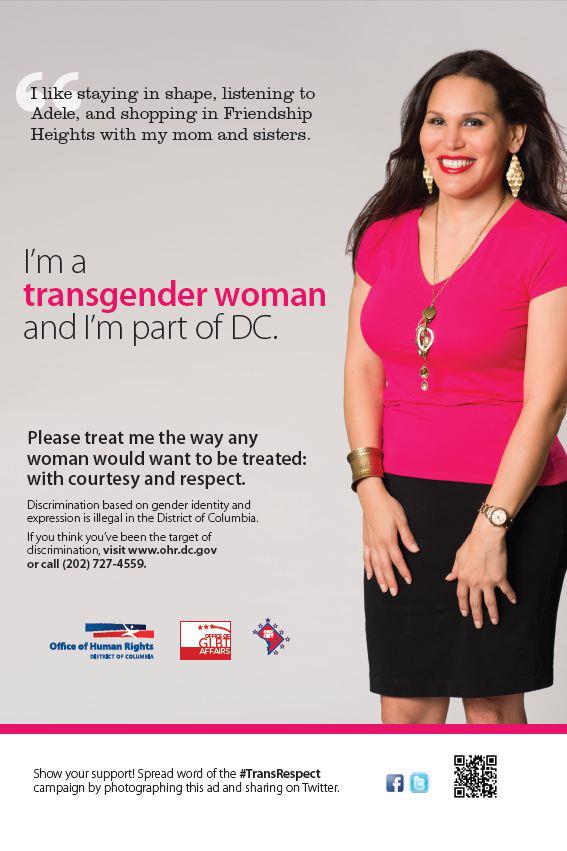 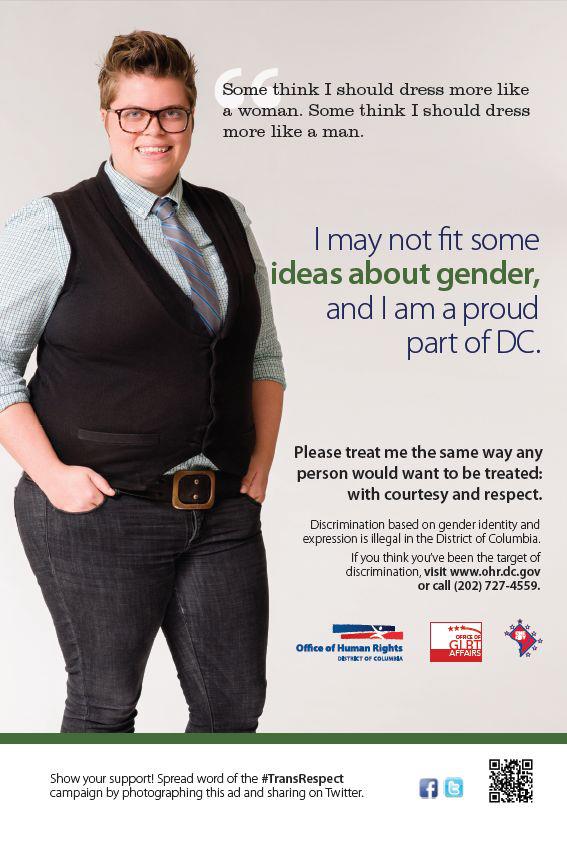