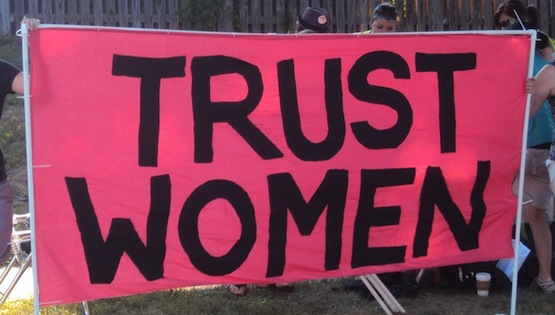 2011 brought an unprecedented assault by anti-abortion and anti-contraception state legislatures on women’s reproductive health—135 reproductive rights laws were enacted in 36 states, 68 percent of which restrict access to abortion. Reproductive-rights groups are fighting back with a simple but powerful pro-choice message: Trust women.

The Silver Ribbon Campaign to Trust Women, a coalition of 42 national and local pro-choice organizations, including the Feminist Majority Foundation, has declared the week of January 20-27 Trust Women Week, marking the 39th anniversary of the Roe v. Wade decision. During this week, the Silver Ribbon Campaign is leading a national Online March in partnership with MoveOn.org, to mobilize pro-choice supporters and build solidarity and momentum for reproductive health, rights and justice in 2012. We urge you to join the Online March.

The 2011 War on Women targeted everything from women’s insurance coverage of abortion to state funding for birth control and cancer screenings. The relentless barrage of attacks were truly a wake-up call. “When the House of Representatives votes that it is okay for doctors to allow pregnant women to die in the emergency room rather than perform an abortion, it’s time for women to wake up and fight back,” says Sophia Yen, M.D., a co-founder of the Silver Ribbon Campaign.

The National Online March, which organizers describe as a “super-petition,” is one way to do just that. The Online March will allow supporters to see their “click” of agreement with the campaign’s pro-choice message as a dot on a map of the U.S. It will be possible to see the number of participants mount in real time. Marchers will have the option to choose from a variety of pro-choice messages, like “I trust women and I vote,” “Reproductive rights are human rights,” “Keep abortion safe and legal, and make it accessible and affordable,” and others. The messages will be directed at members of Congress as well as Governors.

In the 39 years since the historic Roe v. Wade decision, we have never seen such an all-out assault on women’s reproductive health and rights. This year it’s more important than ever before to mark the anniversary by mobilizing and vocalizing support for women’s rights. Click here to participate and see the nationwide Online March grow in real time. To stay up to date on the latest FMF action campaigns, click here. And please don’t forget to share this post on Facebook, Twitter and elsewhere to help spread the word and encourage others to sign on to the campaign.