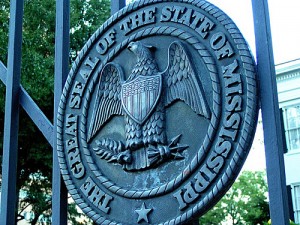 A Judge ruled on Friday to let a strict new anti-choice law stand, but will allow Mississippi’s lone abortion clinic more time to comply with the new regulations. Under this law, House Bill 1390, doctors must have admitting privileges at a local hospital and they must be board certified OB-GYNs. The Jackson Women’s Health Organization, the only provider of legal abortions in Mississippi, would have been shut down without U.S. district Judge Daniel Jordan III’s partial preliminary injunction, ruling that the clinic “will be permitted to operate lawfully while continuing their efforts to obtain privileges.” Reuters reports that although both of the clinic’s abortion providers are OB-GYNs, neither of them have been able to obtain admitting privileges at any local hospital, despite an ongoing three month effort.

The clinic filed a lawsuit with assistance from the Center for Reproductive Rights contending that the law is not medically necessary and is designed to close the clinic. As reported by the New York Times, Mississippi Governor Phil Bryant stated while signing the bill that he wants the state to be “abortion-free.” Similar statements are included on the website of Lt. Governor Tate Reeve.

“Today’s decision has ensured, for the time being, that anti-choice politicians in Mississippi cannot relegate the women of their state to a second class of citizens that can be denied their constitutional rights with the stroke of a legislator’s pen,” Nancy Northup, president and chief executive officer of the Center for Reproductive Rights, said in a statement.

If the doctors are ultimately refused admitting privileges, the closing of the Jackson clinic will force women needing abortions to drive three hours to the nearest legal abortion provider. Jackson Women’s Health Organization owner Diane Derzis has expressed concern that women will seek abortions from “backstreet providers” if her clinic is forced to close. Mississippi already has some of the strictest abortion laws in the country, one of the lowest abortion rates, and the highest rate of teen pregnancy.