Despite a valiant effort by the National Woman’s Party and the National Federation of Business and Professional Women’s Clubs, the Democratic Party today declined to join Republicans in endorsing the Equal Rights Amendment.

It was fear that it would eliminate so-called “protective” labor laws for women that caused it to become controversial, though it was Eleanor Roosevelt’s opposition that sealed its fate, at least until the next convention.

The battle was intense, and had been anticipated ever since June 26th, when Republicans made the E.R.A. a campaign issue by including the following statement in their platform: “We favor submission by Congress to the States of an amendment to the Constitution providing for equal rights for men and women.”

The clash here in Chicago began when the Women’s Advisory Committee, which advises the Resolutions Committee on women’s issues, ignored the E.R.A. in its 15-point program. The portion of their proposal that dealt with labor read:

The Democratic Party will continue its efforts to achieve equality for men and women, without impairing the social legislation which protects true equality by safeguarding the health, safety and economic welfare of women workers. The right to work for compensation in both public and private employment is an innate privilege belonging to women as well as to men, without distinction as to marital status.

Though the second sentence, which attacks the widespread discrimination and entrenched prejudice against married women who work outside the home, had universal support here at the convention, the first sentence did not. 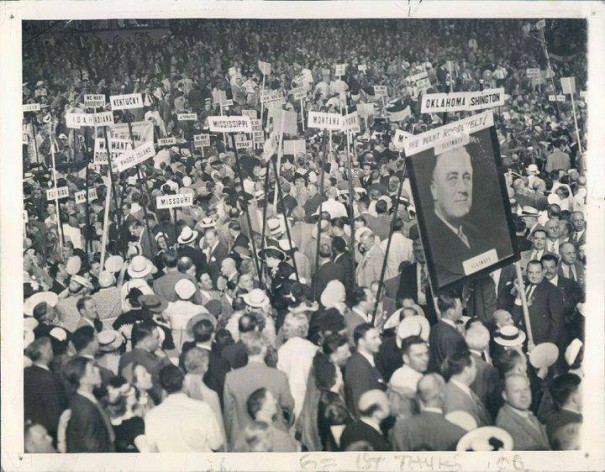 Endorsing equality for women without calling for the legislation that would bring it about was totally unacceptable to the National Woman’s Party, B.P.W. and others. Perhaps the most zealous E.R.A. advocate among the delegates is Emma Guffey Miller of Pennsylvania, who attacked the Women’s Advisory Committee’s validity, since it is small, met in a secret “executive session,” and E.R.A. advocates had no opportunity to make their case. As she noted: “If the official Resolutions Committee feels it wise, necessary and democratic to ask what the people of the nation desire in the platform, how can a woman’s advisory committee for fifteen States meeting in secret session reflect the sentiment of the Democratic women of the nation?”

Though unsuccessful in persuading the Resolutions Committee to allow all the delegates to vote on an E.R.A. plank, advocates did at least get a chance to voice their views to the committee. George Gordon Battle, a New York attorney, was among those allowed to speak at length. But his eloquent address was interrupted when First Lady Eleanor Roosevelt’s statement arrived and was read:

I feel about the Equal Rights Amendment just as I have always felt, namely, that until women are unionized to a far greater extent than they are at present, an equal rights amendment will work great hardship on the industrial group, which after all is the largest group of wage-earning women. Therefore, at the present time, for us, as a party interested in the well-being and protection of workers, to put into our platform an equal rights amendment plank would be a grave mistake, and in this I think all the leaders of the workers would concur.

Battle tried to make a rebuttal to the First Lady’s statement on behalf of the 17 national and 150 local organizations that have endorsed the E.R.A., but Senator Wagner of New York, head of the Resolutions Committee, prevented him from reading statements from those groups and some prominent individuals. But Battle did get to finish his own presentation, and noted a number of laws that clearly discriminated against women. For instance, in Oklahoma, women are prohibited from holding any major public office, and in Wisconsin, Minnesota and some other States, women have inferior rights in regard to making contracts, being guardians of their children, and inheriting property. As he stated:

It seems a curious thing that there should be any objection to such a movement as this when we have progressed so far in other and minor directions toward removing from women the injustices and inequalities under which they have formerly suffered. This committee is not being asked to make a decision on the amendment. It is being requested merely to submit to the convention a plank which provides that the amendment be referred to the various States for action by the voters of those States. Surely this is nothing if not democratic action.

Immediately after Battle finished, Nan Wood Honeyman asked permission to read statements in opposition to the E.R.A. from David Dubinski of the International Ladies Garment Workers Union and Rose Schneiderman of the Women’s Trade Union League. Then without waiting for approval, she did so.

Though the E.R.A. has not yet achieved bipartisan support, the fact that one major party has endorsed it and that there are many strong supporters in the other means that this should be only a temporary setback. Another attempt will be made in 1944 to convince those in opposition that labor laws applying only to women do more to “restrict” them than to “protect” them.

The E.R.A. was written by Alice Paul, formally endorsed by the National Woman’s Party on July 21, 1923, then introduced into the Senate on December 10, 1923, by Republican Senator Charles Curtis of Kansas. It was introduced into the House three days later by Republican Representative Daniel Anthony, also of Kansas, and a nephew of Susan B. Anthony.

It states: “Men and women shall have equal rights throughout the United States and in every place subject to its jurisdiction.”