The National Woman’s Party’s campaign for an Equal Rights Amendment has been officially kicked off!

This was the second and final day of the N.W.P.’s convention, which has been celebrating the 75th anniversary of the first women’s rights convention here in Seneca Falls, New York, July 19-20, 1848.

The true beginning of this new campaign actually dates back to February 16, 1921. At the National Woman’s Party’s first convention since the winning of the vote six months earlier, Nora Blatch Barney, granddaughter of Elizabeth Cady Stanton, called for “absolute equality” and the delegates enthusiastically endorsed turning that ideal into a legal guarantee as the group’s post-suffrage goal.

A committee of lawyers was quickly formed to come up with something that would assure equality for women. On December 11th of that same year they submitted a first draft of a Constitutional amendment: “No political, civil or legal disabilities or inequalities on account of sex, or on account of marriage unless applying alike to both sexes, shall exist within the United States or any place subject to their jurisdiction.” 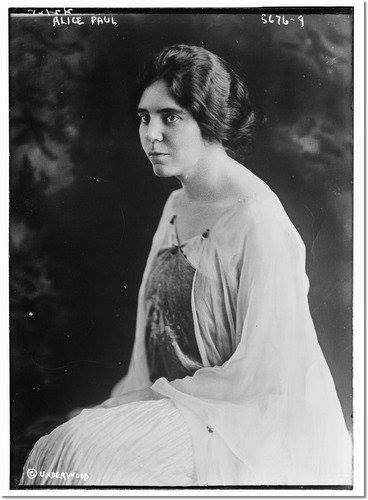 A considerably more streamlined text was submitted to the convention today by its author, Alice Paul, then unanimously approved: “Men and women shall have equal rights throughout the United States and every place subject to its jurisdiction.” Her resolution, as she read it from the pulpit of the local Presbyterian Church to the assembled delegates said:

Whereas, only one point in the equal rights program of 1848, that of equal suffrage, has been completely attained; and, whereas, the National Woman’s Party, as stated in its declaration of principles, is dedicated to the same equal rights program as that adopted on this spot seventy-five years ago, be it resolved, that in order to bring the complete equal rights ideal to the victory that was won for suffrage we undertake the following program: The securing of an amendment to the United States Constitution stating men and women shall have equal rights throughout the United States and every place subject to its jurisdiction.

In speaking for the resolution, Alice Paul said:

We began the campaign for equal rights a year ago. In one State we obtained without difficulty a law establishing equal guardianship and in another State a law making women eligible for jury duty. If we keep on in this way we will be here in another seventy-five years celebrating the one hundred and fiftieth anniversary of the 1848 convention. I think we ought to start immediately on another campaign similar to that which won suffrage. We should demand a Constitutional amendment of Congress and the President. We are not safe until we have equality guaranteed by the Federal Constitution.

Paul then suggested a nickname for the E.R.A.:

We tie up this amendment to the 1848 movement. It is easier to get support for something with tradition behind it and which has grown respectable with age than for something new-born from the brain of the Woman’s Party. We are going to call this amendment the Lucretia Mott Amendment, just as we called the suffrage amendment the Susan B. Anthony Amendment, because to Lucretia Mott more than to anyone else the feminist movement in the United States owed its start.

This was not the only stirring speech to the delegates. For instance, in last night’s opening address to the convention, Alva Belmont said:

In Seneca Falls we stand on consecrated ground, the birthplace of women’s emancipation when 75 years ago women came together to tell the world that slavery could no longer hold half the race. The Woman’s Party today is working for nothing more than the complete fulfillment of the demand for equality made here in 1848. In three-quarters of a century complete equality has been won only in the vote. Discriminations continue to exist in education, in industry, in the professions, in political office, in marriage, in personal freedom, in control of property, in guardianship of children, in making contracts, in the church and in the double moral standard. We have carried out only a part of the command, the fight must go on. Let every woman here consecrate herself to toil to the end that women as well as men shall be free in the United States.

The day ended with a pageant consisting of a fifty-voice choir, 300 banner-bearers, and fifty more participants costumed in the same manner as those who were here in 1848, playing the parts of the original participants in re-enacting the highlights of that previous convention. It was a fitting tribute to the pioneers of 75 years ago and clearly inspirational to those who must now go out and finish the fight begun so well.