The Equal Rights Amendment received the most prestigious organizational approval in its 14-year history today when it was endorsed at the biennial convention of the National Federation of Business and Professional Women’s Clubs.

B.P.W.’s huge membership and nationwide influence should certainly speed up the drive for E.R.A.’s passage by Congress, and submission to the States for ratification. Just last month both the House and Senate Judiciary Subcommittees reported it favorably, and in March, NBC broadcast an E.R.A. debate nationwide, so the campaign begun and spearheaded by the National Woman’s Party in 1923 is moving along well, and clearly gaining support and attention.

B.P.W. then went on to take strong stands on other issues of vital concern to women. The Equal Rights Treaty, which would improve the status of women internationally, and is expected to be voted on in September by the League of Nations, was proposed for approval by Lena Madesin Phillips, president of the International B.P.W. It was quickly endorsed by an overwhelming vote. But the International Woman’s Charter was unanimously rejected after Anita Pollitzer of the National Woman’s Party pointed out to delegates that it would validate and spread so-called “protective” labor laws that actually just limit women’s opportunities in regard to employment through restrictions that don’t apply to men. 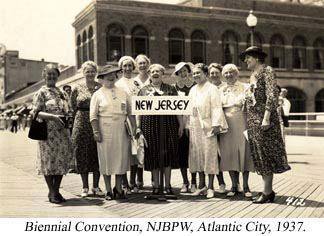 There was a huge celebration at the convention today when Charl Ormond Williams, B.P.W. President, announced to the delegates that Congress had given final approval to repealing Section 213 of the National Economy Act of 1932. This section has been fought by women’s groups since its passage, because it requires government agencies to fire those whose spouses are also employed by the government when reductions in force need to be made. Since men have more job categories open to them, and get promoted faster and higher, it’s husbands who almost always earn more than wives, so it’s the wife who winds up quitting if the couple must live on one salary.

Contributing to the five-year delay in repeal was the fact that discrimination against married women in the workforce is widespread, and prejudice still remains strong. Last year, “Fortune” magazine did a survey, asking a representative sample of Americans: “Do you believe that married women should have a full-time job outside the home?” Only 15% of those polled said “yes,” 37% approved under certain circumstances, and 48% were opposed (54% of men and 41% of women.)

Immediately upon learning of the Section 213 victory, delegates printed up signs saying “Goodbye 213” and “Hurrah for McKellar and Celler.” (Senator Kenneth McKellar, Democrat of Tennessee and Rep. Emanuel Celler, Democrat of New York, were the sponsors of the repeal legislation.) Then, accompanied by a trumpeter and accordionist playing “Pack Up Your Troubles In Your Old Kit Bag,” there was an impromptu march out of Haddon Hall down the Boardwalk here in Atlantic City, with delegates singing most of the way. The repeal bill now goes to President Roosevelt, who is expected to sign it.

But amid all the celebrations, actions and good news, there was one appropriately somber note at the convention. A tribute was paid to B.P.W. member Amelia Earhart, although one group made it clear that it had not yet given up hope: “The New York delegation, to which Miss Earhart belonged, is glad to honor her but does not join in the feeling that she is lost. We deeply and sincerely hope that she will yet be rescued from the islands where her ship disappeared,” said Isabelle Henderson.

Though the mystery of what happened to Earhart three weeks ago today when flying from New Guinea to Howland Island continues, there is no doubt that if she were here at the convention she would applaud B.P.W.’s endorsement of the E.R.A., because she has been advocating its passage and ratification for many years.