The Women’s Army Corps turned out to be such a wartime success that legislation was introduced into both the House and Senate today to continue it as a permanent part of America’s military.

Bills to assure that WACs will always constitute 2% of our Army’s total strength were introduced by the Senate and House Military Affairs Committees at the request of the War Department, and with the backing of President Truman. This is certainly a welcome change from recent campaigns seeking to push women out of the same jobs they were strongly urged to take just four years ago. 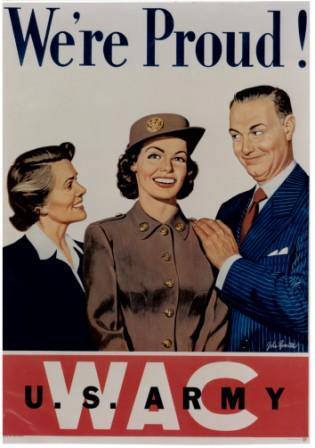 The future of the Corps looked grim when recruiting ended last August, and all training schools were shut down. A year ago it had 99,388 members, but that fell to 19,592 by June first of this year. However, rather than being forcibly disbanded like the Women Air Service Pilots, the Women’s Army Corps now seems about to be reinvigorated. The Women’s Army Auxiliary Corps was originally established on May 15, 1942, and then became the Women’s Army Corps on July 1, 1943 with its members gaining full military status.

The strongest supporter of women in the military is Rep. Edith Nourse Rogers, Republican of Massachusetts. She was sponsoring legislation to permit women to serve their country in uniform even before America was attacked at Pearl Harbor. She said today, “The bill to continue the W.A.C. is a recognition of their services. I am delighted that they are going to continue. The legislation should get through easily in view of the record. They paved the way for all other women’s services except the Nurse Corps.”

Over 140,000 women have served in the Women’s Army Corps, one fifth overseas, and they freed enough men for combat duty to constitute seven entire Divisions. Though officially barred from combat assignments, sixty-two still won the Legion of Merit, three the Air Medal, ten the Soldiers’ Medal, sixteen the Purple Heart and five hundred and sixty five the Bronze Star.

General MacArthur has referred to WACs as “my best soldiers” and General Eisenhower said: “During the time I had WACs under my command they have met every test and task assigned to them … their contributions in efficiency, skill, spirit and determination are immeasurable.” Now it appears that WACs will continue to serve their country as it meets whatever challenges the postwar era may bring.