A suffrage victory in New York State on November 2nd now seems assured if the results of today’s “Telephone Day” poll are an accurate representation of public sentiment.

This new campaign innovation – calling up voters to ask their views – found 75% support for the upcoming “Votes for Women” referendum and lifted the spirits of everyone at the headquarters of both the Empire State Campaign Committee and the New York State Woman Suffrage Party. 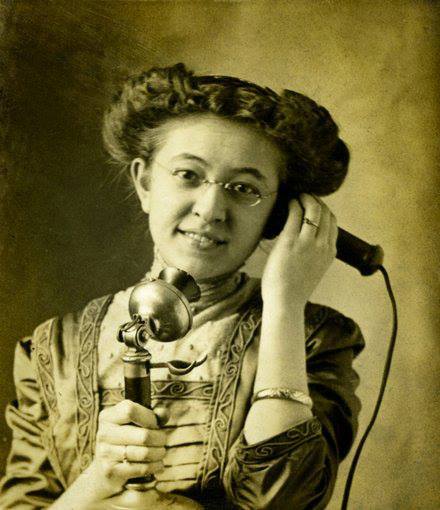 But the calls weren’t just being placed in those two offices. All New York suffrage supporters were asked to call at least five people today. Since there are 100,000 members of the New York State Woman Suffrage Party alone, the volume of calls must have been considerable.

High-ranking government officials were targeted by the more prominent suffragists. New York Mayor Mitchel assured Helen Reid that he would be voting “yes,” and Controller Prendergast told Vera Boarman Whitehouse that he hoped women would win – though like the Mayor, he wouldn’t make a prediction as to the outcome.

Physicians were quite supportive. Dr. Frederick Peterson said: “I believe in votes for women because I believe in votes for men, and because I believe in democracy. Let the men who will vote against woman suffrage next Fall remember they are lining themselves up with the saloonkeepers, the divekeepers, the gamblers, the ward heelers, and all the dark forces of evil in civic life. These forces are arrayed against woman suffrage.”

Dr. Pearce Bailey, a noted neurologist, assured his caller that he did not subscribe to the theory that women’s brains were inferior to those of men, and said that those who did believe such a myth should still vote for suffrage, because increased involvement in civic affairs would give women a chance to improve their brains.

Of the twenty newspaper editors in the city, eighteen were reached. Fourteen were in favor, two were uncertain, and two were opposed. “Every sane editor should be for woman suffrage” said Mr. McAlarney.

Ogden Mills Reid, editor of the Tribune, said: “Suffrage is bound to come throughout the country, and I hope it will be settled favorably in New York in the Fall. Social conditions will be bettered when women vote, and the conditions for the average person will be improved.”

Kenneth Lord, City Editor of the Sun, said: “I am for woman suffrage and I scarcely hear of any opposition.”

Among the clergy who said they strongly favored woman suffrage were Dean William Grosvenor of the Cathedral of St. John the Divine and Rev. Dr. Thomas C. Hall of Union Theological Seminary, with other favorable responses received from many other religious leaders.

The Police Commissioner seemed to be the only man in the city afraid to talk to the suffragists. After some hesitation, the caller was told that he was “not there,” then “on vacation.” When the caller said she’d be glad to call him up wherever he was staying, the story changed to a “walking tour” somewhere. Though the Manhattan officers seemed cool, there was quite a warm reception to the survey at a station house in the Bronx.

Lavinia Dock, a veteran of General Rosalie Jones’ suffrage hikes, was on the phone as well. She called up a real estate office where local politicians were known to gather, and asked the man who answered the phone to poll the room. “Boys, what are you going to do for suffrage?” he asked. “They say they will do everything in their power,” he then told Dock.

On top of all the positive responses from the people of New York, telegrams came in all day from numerous Mayors, former Mayors, and Governors in the West, where women vote in 11 States, and have done so for many years in some of them. All wished the suffragists here (as well as in Pennsylvania, Massachusetts and New Jersey) the best of luck in the four suffrage referenda coming up this Fall.

Politicians from Kansas, where full and equal suffrage was won by referendum in 1912, were especially supportive. W.J. Babb, Mayor of Wichita from 1913-14, said, “None of the woes predicted by some as sure to follow in the wake of woman suffrage, such as breaking up the home and other dire disasters, have befallen the people of Kansas, but our homes remain intact and happy, as before, and Kansas is still prosperous and progressive.”

C.W. Green, presently the Mayor of Kansas City, said, “For more than a quarter of a century Kansas women have voted at municipal elections. Municipal ownership, commission government, public improvements, and better schools resulted. In 1912 equal suffrage was made Statewide with resultant good. Prohibition and other good laws came directly from woman suffrage in cities.”

Empire State suffragists are now awaiting Election Day with vastly increased optimism and enthusiasm, and pronounced today’s experiment such a success that the telephone may become a regular part of their campaign.