A huge caravan of over 60 decorated automobiles, carrying suffragists and 85,000 signatures on suffrage petitions gathered from citizens of all 48 States, assembled in Hyattsville, Maryland, today.

They then drove into D.C. to present their petitions to the U.S. Senate. These “Votes for Women” advocates had been traveling around various parts of the country in small caravans until converging on Hyattsville to begin the final procession. 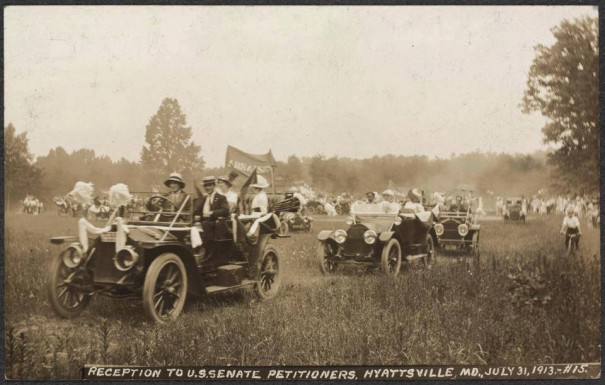 The town displayed its enthusiasm for the cause with a widespread showing of “suffrage yellow” by the local residents. This was actually Hyattsville’s second encounter with a major suffrage event this year. “General” Rosalie Jones and her hardy band of suffrage hikers were met by the town’s mayor, and given a luncheon on February 27th while on their way from Newark, New Jersey, to Washington, D.C. to take part in the huge March 3rd suffrage parade and pageant.

The procession began after a rally in a Hyattsville ball park, and proceeded down roads that were thankfully much drier today than when the hikers slogged along them in February. Finally, the autos made their way down Pennsylvania Avenue in D.C. In the lead vehicle was Alice Paul, head of the National American Woman Suffrage Association’s Congressional Committee, followed by other N.A.W.S.A. officers, and sympathetic members of the Senate Woman Suffrage Committee.

The suffragists were welcomed at the Capitol by Senator George E. Chamberlain, Democrat of Oregon, the principal Senate sponsor of the Susan B. Anthony (nationwide woman suffrage) Amendment. The petitions were then formally presented to the Senate by Senator Robert Owen, Democrat of Oklahoma, with ten other Senators also making speeches urging the amendment’s passage, as 500 suffragists packed the gallery to listen.

Today’s events ended with a magnificent banquet hosted by N.A.W.S.A.’s Congressional Committee at the Brighton Apartment House. More than 20 Members of Congress were present, and Senator Charles Thomas, Democrat of Colorado, who heads the Senate Woman Suffrage Committee, encouraged the diners by saying that “Votes for Women” in the U.S. is “as inevitable as the law of gravity.” When Alice Paul asked for contributions for the suffrage campaign, $1,051 was pledged in just 10 minutes. She then announced that her committee was planning to publish a suffrage newspaper to further the fight and keep members up on the latest developments.

Lucy Burns explained that it was more efficient to concentrate on Congress than to do State-by-State campaigns, and that women now had enough voting power in suffrage States to influence legislation on a national level: “There are over 4 million women in the United States who can vote. One sixth of the Electoral Vote is cast in States where women have the vote.” Burns is not willing to accept the usual explanations for delay: “Every session of Congress, it appears, is ‘the busiest in history.’ The time for us to get action is now.”

If actions like today’s can be kept up, results can’t be far behind!