Founding Feminists is FMF’s daily herstory column. Every day, we re-write the news that was fit to print.

An eloquent and timely reminder that the American Revolution has brought liberty and equality to only some of its citizens over the past century became an unauthorized part of the nation’s Centennial celebration here at Independence Square in Philadelphia today.

Susan B. Anthony, Matilda Joslyn Gage, Sara Andrews Spencer, Lillie Devereux Blake and Phoebe W. Couzins presented a “Declaration of Rights of the Women of the United States” – written by Anthony, Gage and Elizabeth Cady Stanton on behalf of the National Woman Suffrage Association – to a rather startled Senator Thomas Ferry. As President Pro Tempore of the Senate, he was the official representative of the United States Government at the ceremony due to President Grant’s inability to attend, and the vacancy in the office of Vice-President. 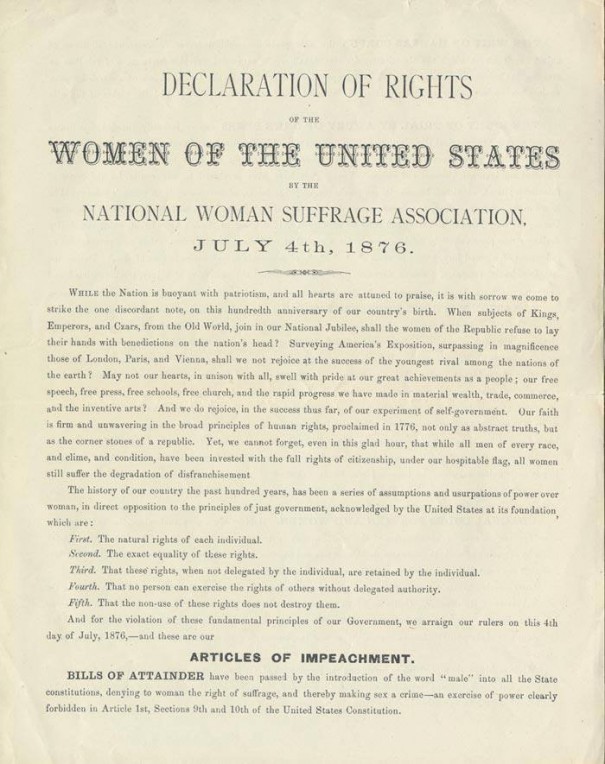 Having accomplished their goal, the five protesters departed, and made their way to an empty platform, where Susan B. Anthony read the entire four-page document to a crowd that quickly gathered to hear her. She began her presentation by saying:

While the nation is buoyant with patriotism, and all hearts are attuned to praise, it is with sorrow we come to strike the one discordant note, on this one-hundredth anniversary of our country’s birth. When subjects of kings, emperors, and czars from the old world join in our national jubilee, shall the women of the republic refuse to lay their hands with benedictions on the nation’s head?

Surveying America’s exposition, surpassing in magnificence those of London, Paris, and Vienna, shall we not rejoice at the success of the youngest rival among the nations of the earth ? May not our hearts, in unison with all, swell with pride at her great achievements as a people; our free speech, free press, free schools, free church, and the rapid progress we have made in material wealth, trade, commerce and the inventive arts?

And we do rejoice in the success, thus far, of our experiment of self-government. Our faith is firm and unwavering in the broad principles of human rights proclaimed in 1776, not only as abstract truths, but as the cornerstones of a republic. Yet we cannot forget, even at this glad hour, that while men of every race, and clime, and condition, have been invested with full rights of citizenship under our hospitable flag, all women still suffer the degradation of disenfranchisement.

She then gave a comprehensive list of grievances women have against a government that practices taxation without representation, denies women the right to be tried a jury of their peers, and has passed numerous unequal codes and laws. She ended her presentation by saying:

And now, at the close of a hundred years, as the hour hand of the great clock that marks the centuries points to 1876, we declare our faith in the principles of self-government; our full equality with man in natural rights; that woman was made first for her own happiness, with the absolute right to herself – to all the opportunities and advantages life affords to her complete development; and we deny that dogma of centuries, incorporated into the codes of nations – that woman was made for man – her best interests, in all cases, to be sacrificed to his will. We ask our rulers, at this hour, no special favors, no special privileges, no special legislation. We ask justice, we ask equality, we ask that all the civil and political rights that belong to citizens of the United States, be guaranteed to us and our daughters forever.

The protesters had originally hoped that their declaration could be presented as an official part of the ceremony. The woman suffrage movement has now gained sufficient support and prestige that five of its advocates had been given official passes to observe the proceedings, and they thought a brief presentation would be at least a symbolic acknowledgment of women’s contributions to the nation over the past century. So, Elizabeth Cady Stanton wrote to General Joseph Hawley, head of the United States Centennial Commission, noting: “We do not ask to read our declaration, only to present it to the President of the United States, that it may become an historical part of the proceedings.”

General Hawley admitted that “Undoubtedly we have not lived up to our own original Declaration of Independence in many respects.” But after making the excuse that the program had already been set and could not be changed, he finally admitted the real reason for his refusal to allow the presentation: “I understand the full significance of your very slight request. If granted, it would be the event of the day – the topic of discussion to the exclusion of all others. I am so sorry to refuse so slight a demand; we cannot grant it.”

Their official passes – allowing them to closely witness, but not take part – in the ceremonies, got the suffragists within striking distance of the official representative of the Government. Then, as Richard Henry Lee finished reading the Declaration of Independence, and those in charge were momentarily distracted while preparing for the next speaker, the women quickly – and with an air of authority – marched to the front of the platform, and gave their declaration to an obviously startled Senator Ferry. They then began to exit the platform with great dignity, giving out numerous copies of their declaration to some of those on stage, and then to many in the crowd who eagerly sought to read it.

So, as befits a work-in-progress, there were two competing ceremonies earlier today to mark America’s Centennial. Men stood on one side of Independence Hall praising the nation’s accomplishments and looking back to 1776, while of the other side, Susan B. Anthony was reminding us of how much still needs to be done if we are to be a true democracy at the next such celebration in 1976.