Susan B. Anthony was as eloquent as she was defiant when sentenced earlier this afternoon by Judge Ward Hunt for “illegally” voting in last November’s General Election.

Though she was not allowed to speak during the two-day parody of justice masquerading as a trial, she was at least given the traditional right to address the Court before punishment was imposed. Judge Hunt first rejected a motion by her attorney for a new trial, to which her defense lawyer believed she was entitled, due to numerous examples of prejudice, including Hunt’s having directed the jurors to render a verdict of guilty yesterday.

The judge then asked if the prisoner had anything to say. She replied:

Yes, your honor, I have many things to say; for in your ordered verdict of guilty, you have trampled under foot every vital principle of our government. My natural rights, my civil rights, my political rights, are all alike ignored. Robbed of the fundamental privilege of citizenship, I am degraded from the status of citizen to subject; and not only myself individually, but all of my sex, and, by your honor’s verdict, doomed to political subjection under this, so-called, form of government.

Judge Hunt then told her he would not listen to any arguments her lawyer had already spent three hours presenting. She then said:

At this point Hunt interrupted her again, but she continued:

But your honor will not deny me this one and only poor privilege of protest against this high-handed outrage upon my citizen’s rights. May it please the Court to remember that since the day of my arrest last November, this is the first time that either myself or any person of my disenfranchised class has been allowed a word of defense before judge or jury …

Hunt told her to sit down and that the Court would not allow her to speak further. To no one’s surprise, she didn’t sit and she did speak:

All of my prosecutors, from the Eighth Ward corner grocery politician, who entered the complaint, to the United States Marshal, Commissioner, District Attorney, District Judge, your honor on the bench, not one is my peer, but each and all are my political sovereigns; and had your honor submitted my case to a jury, as was clearly your duty, even then I should have had cause to protest, for not one of those men was my peer; but, native or foreign born, white or black, rich or poor, educated or ignorant, awake or asleep, sober or drunk, each and every man of them was my political superior; hence, in no sense, my peer.

Even, under such circumstances, a commoner of England, tried before a jury of Lords, would have far less cause to complain than should I, a woman, tried before a jury of men. Even my counsel, the Honorable Henry R. Selden, who has argued my case so ably, so earnestly, so unanswerably before your honor, is my political sovereign. Precisely as no disenfranchised person is entitled to sit upon a jury and no woman is entitled to the franchise, so, none but a regularly admitted lawyer is allowed to practice in the courts, and no woman can gain admission to the bar – hence, jury, judge, counsel, must all be of the superior class.

Another interruption by the judge: “The Court must insist – the prisoner has been tried according to the established forms of law.”

Yes, your honor, but by forms of law all made by men, interpreted by men, administered by men, in favor of men, and against women; and hence, your honor’s ordered verdict of guilty; against a United States citizen for the exercise of ‘that citizen’s right to vote,’ simply because that citizen was a woman and not a man.

But, yesterday, the same man-made forms of law, declared it a crime punishable with $1,000 fine and six months imprisonment, for you, or me, or any of us, to give a cup of cold water, a crust of bread, or a night’s shelter to a panting fugitive as he was tracking his way to Canada. And every man or woman in whose veins coursed a drop of human sympathy violated that wicked law, reckless of consequences, and was justified in so doing.

As then, the slaves who got their freedom must take it over, or under, or through the unjust forms of law, precisely so, now, must women, to get their right to a voice in this government, take it; and I have taken mine, and mean to take it at every possible opportunity.

The now-exasperated judge made one more futile attempt to regain control of his courtroom, and said: “The Court orders the prisoner to sit down. It will not allow another word.” But she still had a number of choice words to say, and ignored the judge in the same way he had ignored her rights:

When I was brought before your honor for trial I hoped for a broad and liberal interpretation of the Constitution and its recent amendments, that should declare all United States citizens under its protecting aegis – that should declare equality of rights the national guarantee to all persons born or naturalized in the United States. But failing to get this justice – failing, even, to get a trial by jury not of my peers – I ask not leniency at your hands – but rather the full rigors of the law.

She then sat down, having made her point to the judge, as well as to the nation via the many reporters who were busily writing down her every word. Judge Hunt then ordered her to stand for sentencing: “The sentence of the Court is that you pay a fine of one hundred dollars and the costs of the prosecution.” Anthony then spoke for a final time:

May it please your honor, I shall never pay a dollar of your unjust penalty. All the stock in trade I possess is a $10,000 debt, incurred by publishing my paper – “The Revolution” – four years ago, the sole object of which was to educate all women to do precisely what I have done, rebel against your man made, unjust, unconstitutional forms of law, that tax, fine, imprison and hang women, while they deny them the right of representation in government; and I shall work on with might and main to pay every dollar of that honest debt, but not a penny shall go to this unjust claim. And I shall earnestly and persistently continue to urge all women to the practical recognition of the old revolutionary maxim, that ‘Resistance to tyranny is obedience to God.’ 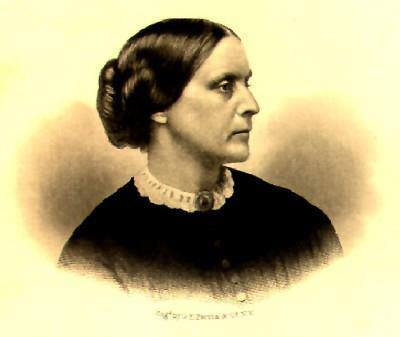 Though this particular skirmish in the battle for suffrage has ended without any extension of the franchise, it is by no means a setback, because the struggle for women’s equality, which is being waged on many fronts, has been reinvigorated. Women – and men – who are working nationwide for equal suffrage will certainly find their ranks increased as a result of what was said and done this day.

Regardless of what strategy – or combination of tactics – eventually brings total victory to the cause of woman suffrage, Susan B. Anthony’s courage in undertaking this protest, and her refusal to pay such an unjust fine, deserve praise and admiration by all those who believe in democracy. Though the judge could abuse his authority, and prevent even the illusion of justice from being dispensed in his tiny courtroom this week, he is powerless to stop this brilliant and dedicated advocate of suffrage from gaining a coast-to-coast audience for her flawless and compelling arguments when they are printed in the nation’s most influential newspapers.

In exactly one month, the movement for women’s rights will celebrate the 25th anniversary of that first gathering in Seneca Falls, New York, on July 19th and 20th, 1848. A great deal has been accomplished in just a quarter century, and the pace of progress is accelerating. Though none of the 37 States have yet been won for equal suffrage, women have voted on the same basis as men in the Territory of Wyoming since 1869 and in Utah Territory since 1870. There are now well-established suffrage organizations composed of experienced and talented individuals operating nationwide.

Virginia Minor, a suffrage leader in Missouri, is also trying to use the 14th Amendment to gain the vote for women, though she’s taking a different approach from Anthony. When Registrar Reese Happersett refused to allow Minor to register to vote on October 15th of last year, solely because she was a woman, she sued him. It may take a while to get there, but a victory for Minor in the Supreme Court could enfranchise women in all States and Territories overnight.

This week’s courtroom drama clearly shows that the second quarter century of the struggle for women’s equality will be at least as energetic and eventful as the first, and there can be no doubt that the day of victory is now considerably closer than it appeared to be just a year – or even a few hours – ago.