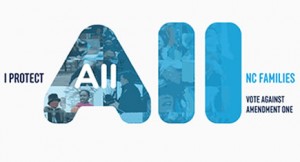 North Carolina has the dishonorable distinction of becoming the first state to put an anti-gay marriage amendment on a 2012 ballot.

On May 8, voters in the state will weigh in on the North Carolina’s Amendment 1, which states that “marriage between one man and one woman is the only domestic legal union that shall be valid or recognized in this State.” This strict language not only eliminates the possibility of marriage, civil unions or domestic partnerships for lesbian and gay couples, but also significantly limits the rights of all unmarried couples.

We in North Carolina’s LGBT activist community feel we have a strong chance at defeating Amendment 1. Our country is reaching a tipping point around same-gender marriage. In the last year alone, we’ve hit several key milestones. Some highlights:

But we need your help. Watch this video to find out how–no matter where you live–you can help turn the tide of discrimination and beat North Carolina’s Amendment One.

To recap, you can help defeat Amendment 1 by taking any or all of the following five simple steps:

Melody Moezzi is a writer, activist, attorney and award-winning author.