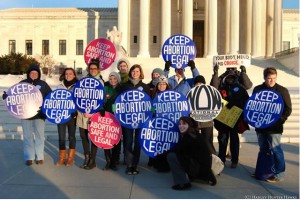 Senators Roger Wicker (R-MS) and Rand Paul (R-KY) introduced the Life at Conception Act in the Senate yesterday that would establish that human life begins at the moment of conception. If passed, the bill would extend equal protection under 14th article of amendment of the Constitution to unborn fetuses and would reverse Roe v. Wade, the Supreme Court decision that legalized abortion in the US.

At the March for Life, held Monday at the National Mall, Senator Wicker pledged to overturn Roe v. Wade and stated, “We believe Roe v. Wade has led to a three-and-a-half decades-long holocaust in the United States of America.”

Nancy Keenan, President of NARAL Pro-Choice America, criticized the bill stating, “This is the latest example of hypocrisy from politicians who said they want less government in our lives yet propose bills like this one that would open the door to more political interference in our personal, private decisions. If this bill resembles past versions, it would ban abortion – even in cases of rape or incest and threatens to outlaw birth control.”