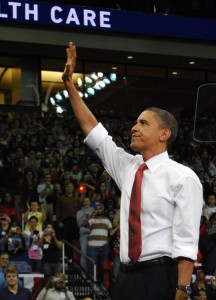 “There’s no such thing as a free lunch,” President Barack Obama began in a speech addressed to students at Northern Virginia Community College on Tuesday. In a town hall format in the school’s gymnasium, the President spoke about what’s been on everyone’s minds: the current state of the economy and the resulting budget cuts.

Relating the budget cuts to the financial problems of college students, Obama asked how many students in the room were also on a tight budget, saying that, just like students, they are “looking for change under couch cushions” in order to cut spending without having to cut social programs that are important to us, like Medicare, Medicaid, and Social Security. As these programs are being targeted by Republicans in office, Obama and other Democrats are fighting to maintain and strengthen them, while finding other ways to reduce the deficit. It was evident that those in the audience were worried about these very social programs, as well as what would be cut instead.

Although he did not attempt to address anything remotely related to Title X funding cuts or the slashing of abortion funding in the District of Columbia, he did contend that he wanted to hold the wealthy accountable and end the Bush-era tax cuts for the richest in our country when the two-year extension he placed on it last year came to an end. He also reasoned that we could find savings in the defense budget, that there was room to cut there as well, though did not articulate what specifically within the defense budget and how he would go about it.

“The question isn’t if we should cut; it’s how,” he said, noting that the things he refused to cut spending on are infrastructure, technology research, and education. He argued that education funding for things like Pell grants should go up rather than be cut, and that we should invest in education and the environment, but attempt to use that money more efficiently. “We must live within our means, while investing in the future,” he said. The applause for comments regarding education and clean energy spanned the room, generating a lot of positive energy in the crowded gym.

He kept coming back to the budget being a “shared responsibility,” a challenge that we all have to work toward tackling together. “I need your help,” he said. “Hold us accountable. They want to reduce the deficit on your backs, unless you make your voices heard.” As we have been, we plan to do so in the immediate future and beyond that. Students have been speaking out about the programs that they want protected. The question is not whether we will voice our opinions, but rather, whether they will listen.