A special New York State Assembly Committee report investigating conditions of female and child labor in New York City was submitted today, and it paints a bleak portrait of working conditions for those who earn their living at department store counters, in factories, or through home work.

The typical working day in New York City’s large mercantile establishments is 8 a.m. to 6 p.m., with 30 to 45 minutes for lunch Monday through Saturday, though in some stores employees work later on Saturdays, often until 9 or 10 p.m.

In one of the small stores surveyed, the hours were 8 a.m. through 9 p.m. Monday through Friday, and until 11 p.m. or midnight on Saturdays with some employees working 8 a.m. until noon on Sundays, though they receive extra compensation for their Sunday work. 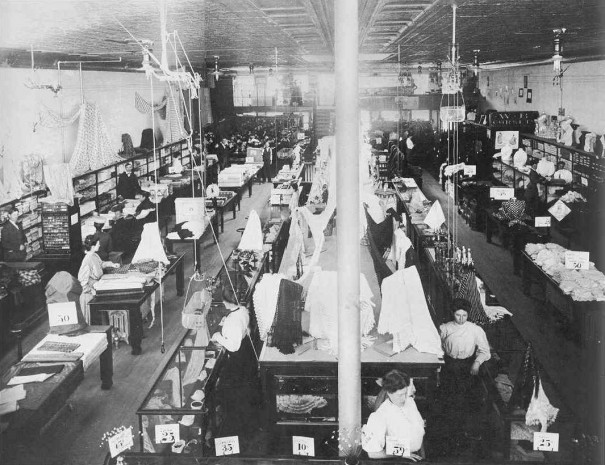 Large numbers of girls 14 to 16 years of age are employed at $1.50 a week and up. The insufficient number of truant officers employed by the Board of Education means they can rarely do personal inspections of these establishments looking for school-age workers, and tend to take the word of the owners that they do not employ children under 14. Employment of children even under that age is not barred under all circumstances by State law at present. Impoverished parents also seem willing to fill out certificates stating that their children are old enough to work, even if this is not the case. These factors enable “sweat shop” operators to employ young children for at least 60 hours a week in return for $1.75 to $2.00 pay.

The law passed seven years ago requiring employers to provide seats for female workers has not been generally observed, and is in need of amendment to make it better enforced. Though only the clothing industry has been carefully examined so far, there is a “general and constant violation” of the factory laws and of the regulations of the Board of Health by those who employ labor in shops and tenements.

In one example of the present risks to public health, an employer’s child became sick with Scarlet Fever, and the Health Inspector only ordered the employer to close the door between his living room and the workshops, but not shut down, a choice the inspector is permitted to make. Later, a Factory Inspector finally ordered the employer to stop work, but the infected coats had already been sent to the wholesaler without being tagged (as is required for tax purposes.) It was not until nine days after the initial report of the child’s illness was made to the Health Department by the family physician that the infected clothing was tracked down and fumigated, clear proof that the system isn’t working well in the tenements.

Though the committee was able to give an interim report today, further study is needed, especially since there is a great reluctance on the part of employees to testify about working conditions until they can do so in private executive sessions where no employers are present. Hopefully the full report, when it’s completed, will help bring about sufficient outrage over current working conditions that they will be improved in the future through both labor union activism and appropriate legislation.