Founding Feminists is FMF’s daily herstory column. Each day, we dig in to a theoretical headline from women’s history from that day in years past.

The woman suffrage movement’s youngest supporters may be among its most insightful and articulate if those who spoke earlier this afternoon at the Brooklyn Woman Suffrage Association’s headquarters are any example.

School-age suffragists came up with some devastatingly logical responses to some of the most common arguments used by the “antis.” 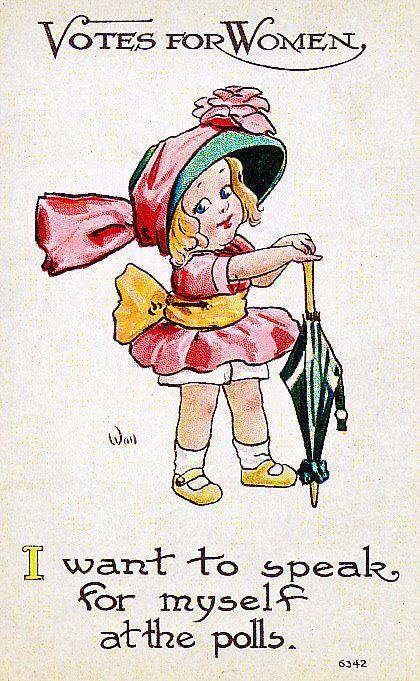 Edith Merzbach hurled several questions at suffrage opponents, one aimed at the myth that women would somehow lose their femininity at the polls:

Why is it when boys and girls go to the same schools, men and women go to the same churches, and sit in the same pew, go to concerts and lectures together, that once a year, if they should meet at the voting places, the women would suddenly be unsexed?

Merzbach also turned another “anti” argument about women voters neglecting their families against those who created it:

While the anti-suffragists are gathering in conventions to oppose this advance step, what is becoming of their husbands’ suppers? While they are carrying the protest from house to house, who is rocking their cradles at home? They devote more time to shopping in one season than would be required for voting in two years. Are not their homes being neglected then?

Mildred Leyd was eager to personally refute the assertion that only a few older women wanted the ballot, or to sign a petition asking for a suffrage referendum. “Those who made that statement hadn’t yet heard from us,” she said. “We so long to sign the petition that we would fain reverse the sentiment of the poem and exclaim ‘Forward turn forward, O time in thy flight, and make me twenty-one just for to-night.’ ”

Leyd then went on to lampoon the “logic” of some basic anti-suffrage arguments. Especially effective was juxtaposing two of the most common ones: “If suffrage were granted, women would not take sufficient interest to vote, for she does not want it,” and “If granted she’d take so much interest she’d neglect home.” She then gave an example of a brother and sister who went to the same school, where the sister took all the prizes. And yet, years later, the boy “is perfectly willing to legislate for all his sisters and his mother besides.”

The veteran suffragists in the audience were quite impressed by the students’ rhetorical skills, and cheered by the thought that the battle for the ballot – begun when the students’ grandmothers were about the same age as today’s orators – will be carried on by this new generation with great vigor and eloquence.