Theodore Roosevelt joined the ranks of suffrage speakers tonight, and left no doubt he will bring the same enthusiasm and stirring oratory to the “Votes for Women” campaign which have characterized his efforts for other causes he passionately supports.

Ten suffrage organizations combined to present a program at New York’s Metropolitan Opera House to accompany the former President’s first suffrage speech. Not only was every seat and box sold out, but the aisles were packed with those grateful for the opportunity to listen, even if they had to stand for the entire length of the program.

When the curtain went up, there was a loud burst of applause and waving of both American flags and suffrage pennants as the audience spotted Col. Roosevelt next to Rev. Anna Howard Shaw, president of the National American Woman Suffrage Association. Dr. Shaw opened the program by reminding the audience of recent victories in Kansas, Arizona and Oregon – and one defeat. The Colonel enthusiastically nodded and clapped when Dr. Shaw talked of how what should have been a suffrage victory in Michigan had been “stolen.” 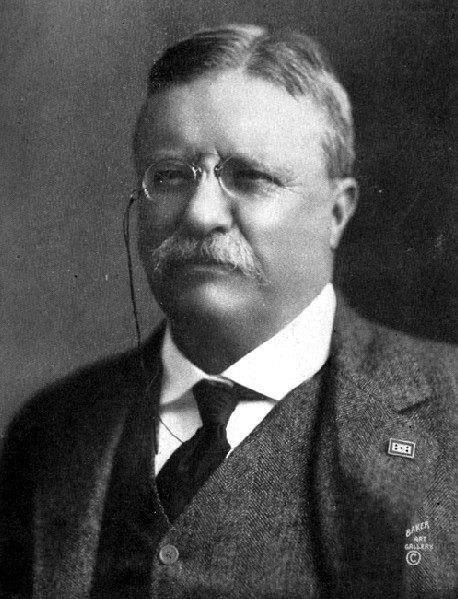 On November 5th, a suffrage referendum in Michigan came within 760 votes of victory out of 495,510 cast (49.92% in favor, 50.08% opposed). But charges of fraud favoring the anti-suffrage forces were so widespread that a new referendum was put on the ballot on April 7th. This time, the liquor interests waged an open, all-out, extremely well-funded campaign against suffrage, and it was defeated again.

After Dr. Shaw finished bringing her listeners up to date on other late developments in the suffrage campaign, she proceeded to the main business of the night and introduced Col. Roosevelt to an audience that gave him a two-minute standing ovation.

As always, Roosevelt gave his listeners what they came for. In an hour-long speech he addressed and refuted every objection to woman suffrage and gave positive reasons for advancing the cause as well.

To those who would oppose woman suffrage in America because of the violent actions of some British militants, he said: “It is an utter absurdity, it is wicked to condemn a great law-abiding movement because there are a few elsewhere who do foolish and wicked things. As Dr. Shaw said, apply to men that rule that none are worthy of the vote because some of them are not and there will not be one of us permitted to vote.”

He attacked the idea of male supremacy directly, noting that things had changed greatly since the first women’s rights convention in Seneca Falls, New York, in 1848:

At that time you would have found a great number of worthy people, including the very orthodox people, who insisted that the foundation of the family would have been ruined if it didn’t rest on the masterful headship of a man. But now we have advanced to a far better ideal, the ideal of equal partnership between man and woman ….

Conservative friends tell me that woman’s duty is the home. Certainly. So is man’s. The duty of a woman to the home isn’t any more than the man’s. If any married man doesn’t know that the woman pulls a little more than her share in the home he needs education. If the average man has more leisure to think of public matters than the average woman has, then it’s a frightful reflection on him. If the average man tells you the average woman hasn’t the time to think of these questions, tell him to go home and do his duty. The average woman needs fifteen minutes to vote, and I want to point out to the alarmist that she will have left 364 days, twenty-three hours and forty-five minutes.

Roosevelt then said that not only had the predictions of disaster made by opponents of woman suffrage been proven false, but that each new suffrage State had benefited from this reform:

Mind you, I don’t believe that getting votes for women will cure all our ills or ailments, but I give it as my deliberate and careful judgment that in every State where suffrage has been tried, there has been, as far as I know, no single instance where it has produced damage. And there has been case after case where it has worked for universal betterment of social and civil conditions … In every community where women have received the vote it has meant so much loss of power to the underworld …

Every disbeliever in decency will oppose this movement. And when you see men who make a business of that which is foul and base rallying against a cause you may be convinced that it is pretty good common sense to stand for that cause.

He then noted that when he was in Michigan campaigning for President last year, he saw “Vote Against Woman Suffrage” signs outside of every saloon in the State, making it clear where much of the opposition comes from.

He exclaimed near the end of his presentation that: “There is no surer sign of advancing civilization than the advanced respect paid to a woman, who is neither a doll nor a drudge.”

Roosevelt then handed the meeting back to Dr. Shaw, who, as might be expected after such a speech, had a most successful call for contributions to the cause. This was followed by an elaborate and beautiful pageant put on by the combined efforts of nine different suffrage organizations. It featured women who represented “Hope,” “Truth,” “Woman,” “Justice” and “Columbia.”

The pageant ended with a procession of women representing the nine “equal suffrage” States, and the singing of the “Star Spangled Banner” to close the evening. Like the huge parades of last May in New York and on March 3rd of this year in Washington, D.C., the addition of Col. Roosevelt as an active supporter of the cause offers still more proof that this is a new era for the suffrage movement, and that its final victory can no longer be doubted – or be far off.