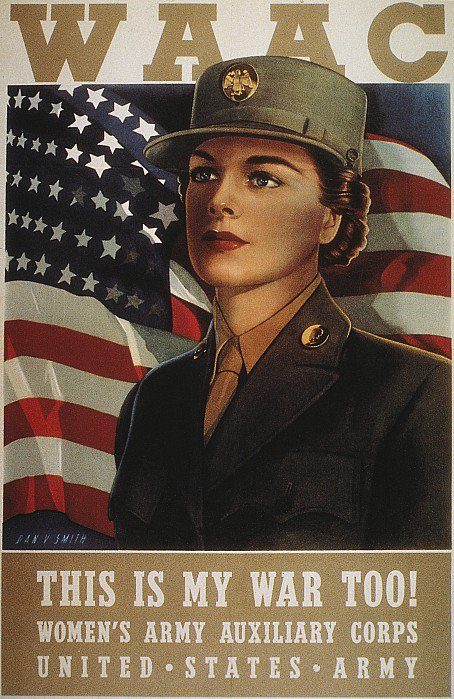 She also indicated that entire WAAC units may soon be stationed outside the U.S., saying, “Some of you, I rather think before long, all of you, may have the opportunity to go overseas, as many as want to.”

She cited the pressing need for members of the WAAC to work alongside our troops now in England, and noted that President Roosevelt had been quite impressed by the courage of some servicewomen recently. When in Casablanca in January for a meeting of the Allied leaders, he had the opportunity to greet a small detachment of WAACs, who were on their way to being the first posted to Algiers. Their ship had been torpedoed en route to North Africa. Some were pulled off a burning deck, and others dragged injured sailors into their lifeboat. They were later picked up by a destroyer, and had the opportunity to talk to the President as they disembarked. He said that they seemed quite calm about their experience, as though it was just an expected part of military life.

The First Lady also discussed post-war work that will need to be done: “A world in which people starve and live under fear and injustice is no world in which peace thrives.” She said that many people believed that all great nations exploit all weak ones: “We will have to do some work to convince all peoples of the world that this is not so. The first piece of work we have to do is watch ourselves.”

In another development today, fifty more women were inducted into the service in a ceremony carried over CBS Radio during the “Andre Kostelanetz Presents” program. Col. Overta Culp Hobby, director of the WAAC, urged every woman to ask herself if she was helping the war effort to the best of her ability, and to enlist in her organization if possible in order to free up more men for combat: “Thousands of tasks are now being done by men, men whose presence on the battlefront may mean victory, and whose absence may mean defeat.”