Jeannette Rankin, who was Field Secretary for the National American Woman Suffrage Association (NAWSA) before returning to her home State of Montana last year to work full-time for passage of a suffrage referendum, came up with a novel idea recently for promoting the cause of woman suffrage at the Panama-Pacific International Exposition.

Reverend Anna Howard Shaw, NAWSA’s president, embraced it immediately, and today their enthusiasm proved justified as this simple idea has been a great success. 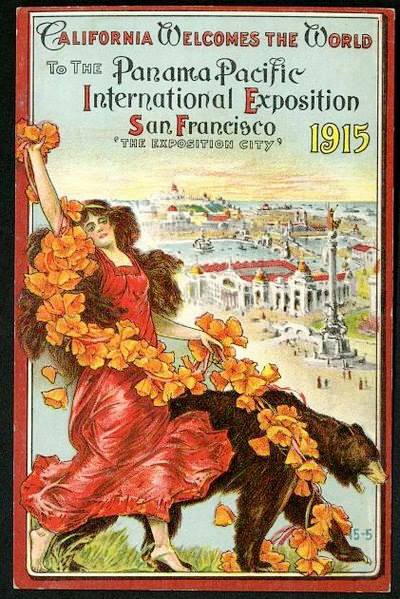 Huge numbers of visitors from the East, where no State has equal suffrage, are visiting the Exposition here in San Francisco. It opened on February 20th, runs through December 4th, and is being held to celebrate the completion of the Panama Canal last August as well as to showcase the city’s remarkable recovery from a devastating earthquake nine years ago. Since women in California (as well as in ten other Western States) can vote on the same basis as men, Rankin wondered if this visit to “suffrage country” by all those Easterners could provide a way to get them comfortable with the idea of women as voters. Having large numbers of women walk about the fairgrounds wearing “I’M A VOTER” buttons came to Rankin as the perfect strategy.

Those buttons were seen everywhere today, and it’s proving an educational experience for Eastern men who may have never seen or talked to a woman voter before. Many are pleasantly surprised to see that voting women – and even active suffragists – are not as anti-suffragists portray them.

Of course, one of the women who can’t wear the button is Reverend Shaw herself. Though Jeannette Rankin is a voter, thanks to having played a major role in winning woman suffrage in Montana on November 3rd, Shaw is from Pennsylvania, which along with New York, Massachusetts, and New Jersey, will be voting on woman suffrage this Fall.

But Shaw hopes to be wearing her “I’M A VOTER” button six months from now, saying, “I have saved a button in the hope that the men of Pennsylvania will be just as sensible as the Western men who have enfranchised ten million women and seem to be glad of it.”