Though it’s been barely 24 hours since nationwide celebrations greeted President Truman’s announcement at 9AM Eastern War Time yesterday of Germany’s unconditional surrender, today brought a reminder that the battles in the Pacific are far from over, and Army Nurses are as vital to our war effort as ever.

The Office of War Information said today that the Army had an immediate need for 9,000 more nurses so that its Nurse Corps can reach its maximum authorized strength of 60,000 by June 1st. Several reasons were given to explain why the numbers need to be rapidly increased despite victory in Europe.

Many of the troops who fought their way to the heart of Germany, or were shot down while flying missions over enemy targets are still recovering from their wounds. Substantial numbers of civilians who were recently liberated from Nazi rule are in need of medical care in countries whose infrastructures – including hospitals, clinics and doctors’ offices – were devastated by the fierce fighting. And now that the war has ended in Europe, there must obviously be a massive redeployment of Allied forces to the Pacific, where sickness rates among the troops as well as attrition rates among the nurses will be higher. 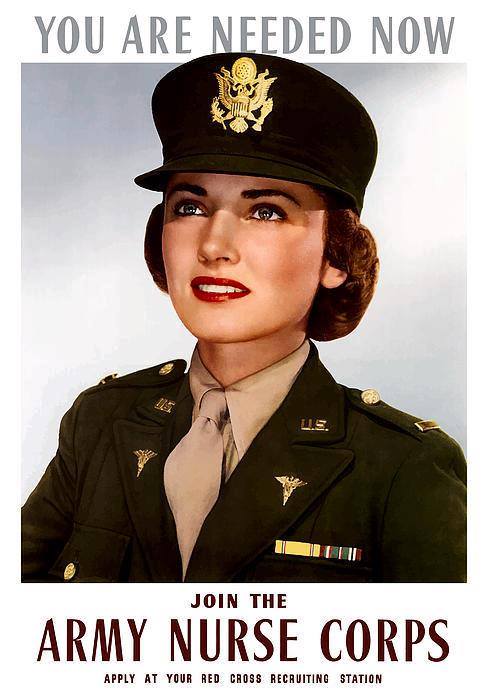 It is estimated that 4.000 of the 9,000 nurses needed will come from those already registered with the armed services, and need only be called to serve, plus those about to finish their training with the United States Cadet Nurse Corps. But that still leaves the Army 5,000 nurses short of its goal, so that many must enlist within the next three weeks. Once the goal of 60,000 has been reached, the Army plans to begin rotating those who have served long tours of duty overseas back in the U.S., and will still keep recruiting, so that even with attrition, new recruits can keep the Army Nurse Corps at 60,000 through the end of the war plus six months.

Army Nurses have been in the war from the moment America first entered it. On December 7, 1941, there were less than 1,000 Army Nurses, but 82 were stationed at Pearl Harbor. Many distinguished themselves by going above and beyond the call of duty that day. One was Annie Fox, Chief Nurse at Hickam Field, who became the first woman to be awarded a Purple Heart, because “her fine example of calmness, courage and leadership was of great benefit to the morale of all with whom she came into contact.” Though her award was changed to a Bronze Star last year when it was decided that only those who were wounded could qualify for a Purple Heart, her actions on that first day still serve as an example of the bravery and professionalism of America’s nurses.

The Army Nurse Corps was officially established in 1901, with the Navy following suit in 1908. But many nurses were serving in military hospitals during the Civil War, with Dorothea Dix appointed Superintendent of Nurses for the Union forces on June 10, 1861, just two months after the conflict started. The Government hired 1,500 civilian nurses to serve during the Spanish-American War in 1898.

During the First World War, 21,460 nurses were recruited by the military, about half of them sent overseas. Though not assigned to combat duty, they worked in environments that were the most vulnerable to the spread of influenza, and over 200 died during that epidemic.

Army Nurses have been captured as prisoners of war, subject to air raids, and have had to practice their profession while under fire, so they are entitled to the same respect as any other member of our armed forces. In recognition of this, both Army and Navy Nurses were granted full military status on February 26, 1944.

Though many tough battles are sure to lie ahead in the Pacific this summer, and the worst fighting of the entire war will occur during the invasion of Japan itself, an operation expected to begin late this Fall, there is no doubt that women will serve their country as well in the future as they have in the past. They therefore deserve our commendation for services already rendered, as well as our thanks in advance for their upcoming sacrifices in the drive for total and final victory.