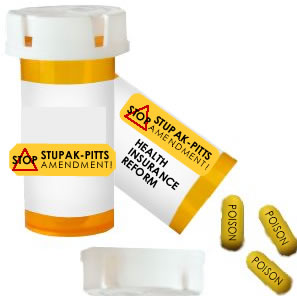 “Our medical experts have determined that your life was not in danger and you could have carried the pregnancy to term. And, by the way, you owe us $9,000.”

Her voice breaking, D.J. Feldman, a Washington, D.C. federal employee, recently spoke to the press about her struggles with her insurance company after she aborted a much-desired pregnancy because of a fetal diagnosis of anencephaly (the absence of a major portion of the brain, skull and scalp). The insurance would only cover abortion in the case of rape, incest or a threat to her life, so the fact that if Feldman had continued the pregnancy, it would have been both physically and emotionally grueling—resulting either in a fetal demise, a stillbirth, or a live birth of a newborn who would quickly die—had no effect on the insurance company’s decision.

The primary culprit in this situation is not really Feldman’s insurance carrier, however, but the U.S. Congress. For decades it has imposed such unconscionable restrictions on abortion coverage for federal employees, as well as on women in the military, Native Americans using government provided health facilities and women on Medicaid in a majority of states.

Feldman is speaking out now because of her outrage that the notorious Stupak-Pitts amendment to the House health reform measure would extend such federal bans on abortion coverage to the millions of women who are enrolled in the private insurance market. Under this amendment, any insurance plan that wishes to be part of the new national health-care exchange would be prohibited from offering abortion coverage, although most insurance plans currently offer this coverage.

As Nancy Northrup, president of the Center for Reproductive Rights, which organized the press conference at which Feldman spoke, put it: “The ban on abortion coverage represents an enormous and unprecedented incursion into the terms of the private insurance market….Stupak-Pitts would regulate abortion coverage for people working for private employers or those who are self-employed.”

The press conference also featured a television advertisement that has just been produced by the Center which effectively points to the unfairness—if not the absurdity—of such a ban. The ad will run on MSNBC, other cable stations and media websites.

As traumatic as D.J. Feldman’s story is, she acknowledges that she is more fortunate than many other women in her situation, since she and her husband were able to pay for her abortion themselves. But she doesn’t want other women forced into a similar situation, especially those without extra financial resources. Feldman has not only spoken to the press but also visited various Congressional offices to speak against Stupak-Pitts. “I realized I had a moral obligation to speak out,” she said.