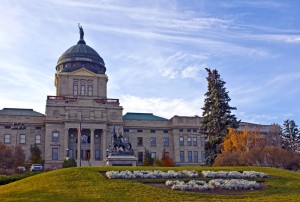 On Monday, the Montana Supreme Court decided that a case brought by six couples and the ACLU urging the court to extend partnership benefits to same sex couples was too broad and violated separation of powers.

The case, which featured six same sex couples denied rights under various statutes such as bereavement leave, protections in case of divorce, and death benefits, urged the court to recognize the rights of all same sex couples in the state and to change existing statutes to reflect those rights.

In a 4 -3 decision, the MT Supreme Court agreed with the lower court that the case was too broad in scope and that asking the court to change existing statutes violated the separation of powers between the court at the state legislature. The Supreme Court did change the lower court’s ruling that the plaintiffs could not amend their case to be more specific.

Montana Supreme Court Justice James Nelson wrote in his dissent, “I have never disagreed more strongly with the Court as I do in this case. With due respect, I believe today’s decision… wrongly deprives an abused minority their civil rights.” He also challenged the state amendment defining marriage as between a man and a woman, saying “Indeed, a not-too-distant generation of Montanans will consign today’s decision, the marriage amendment, and the underlying intolerance to the dustbin of history and to the status of a meaningless, shameful, artifact.”

The plaintiffs plan to re-file their case after reviewing the court’s decision.

The Montana State Capitol from Shutterstock