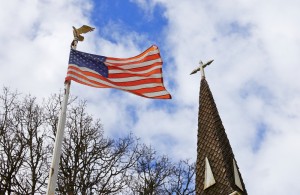 Republican lawmakers in North Carolina have proposed a bill that would give the state legislature the authority to establish a state religion and allow prayer in public institutions such as schools.

The bill was proposed by Representative Carl Ford (R-China Grove) and Harry Warren (R-Salisbury) in response to a lawsuit to stop Rowan County commissioners from beginning meetings with a Christian prayer.