On Tuesday, September 17, the Afghan Women’s Political Participation Committee held a press conference on their “For Whom Am I Voting?” campaign in Herat, Afghanistan. The conference was meant to support and promote women’s participation and utilization of the women’s vote in the next election. Women’s rights advocates, intellectuals and journalists attended this conference; women advocates discussed their concerns and demands about the upcoming elections in April of 2014.

On September 10th, Dr. Alima, the head of the Afghan Women’s Political Participation Committee gave an interview to TOLO News. Dr. Alima talked about Afghan women’s voting rights and how they should evaluate candidates in the spring elections. According to Dr. Alima, female voters should only support candidates that believe in gender equality and women’s rights.

According to TOLO news, the campaign will remind Afghan women about their power to shape the political system of the country, as well as the importance of not supporting human rights violators and candidates who do not believe in the merits of women’s empowerment. The committee’s campaign was launched with posters, which they distributed all over Afghanistan. 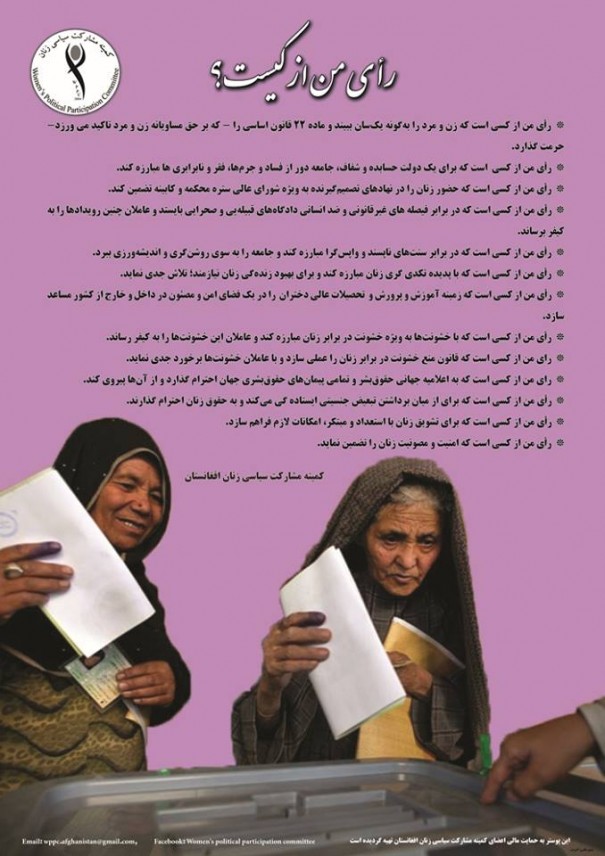 – I am voting for a person who respects women’s rights and  respects Article 22 of the constitution which emphasizes equal rights of men and women.

– I am voting for a person who will stand for an accountable and transparent government, free of corruption and inequality.

–  I am voting for a person who guarantees to support women’s participation in decision-making institutions such as the Court and Cabinet.

–  I am voting for someone who will stand against the illegal and inhumane tribal decisions and punish those who make these decisions against women.

–  I am voting for a person who will stand against the harmful traditions,  improve women’s lives and will take action to create a safe environment to for girls to get their education.

–  I am voting for someone who will stop violence, especially violence against women, implement, and enforce the Violence Against Women Act.

–  I am voting for a person who will respect and follow the Universal Declaration of Human Rights and other international covenants of human rights.

–  I am voting for someone who guarantees the safety and security of women.