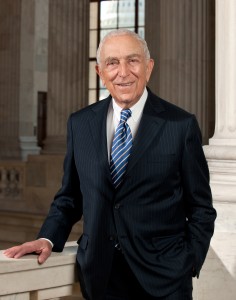 New Jersey Senator Frank Lautenberg (D) passed away this morning due to complications from viral pneumonia. The Senator was 89 years-old and was the oldest currently serving member of the Senate. He holds the record for most votes cast by a Senator from New Jersey and cast his 9,000th vote in December 2011.

Lautenberg served five terms in Congress despite stomach cancer and other various health problems throughout the years. A champion of progressive legislation, Lautenberg was responsible for many laws that are considered standard today such as no smoking on airplanes, 0.008 blood-alcohol limit for driving, and a legal drinking age of 21. Lautenberg was also key in advancing several women’s rights and gun control laws, such asprohibiting convicted abusers from owning guns, attempting to defund abstinence-only education, and enforcing truth in advertising laws on crisis pregnancy centers.

The Senator was the last World War II veteran in Congress. He is survived by his late wife and six children.